London’s Barbican Centre is one of Europe’s largest Performing Arts Centres, regularly hosting concerts, theatre performances, film screenings and art exhibitions / installations. This harsh looking set of buildings in the Brutalist style looks like it was ripped straight out of a J.G. Ballard novel, or used as a backdrop to BLADE RUNNER (London downpours, free of charge).

With that in mind, the Barbican then seems like the ideal place to host an exhibition of all things futuristic and fantasy, a collection of historic items tied together with the bold title INTO THE UNKNOWN: A JOURNEY THROUGH SCIENCE FICTION.

The press release boasts of over eight hundred pieces on display, many of which have never been seen in the UK before, from the likes of Jules Verne, Ray Harryhausen, Margaret Atwood, Jack Kirby and Soda_Jerk. 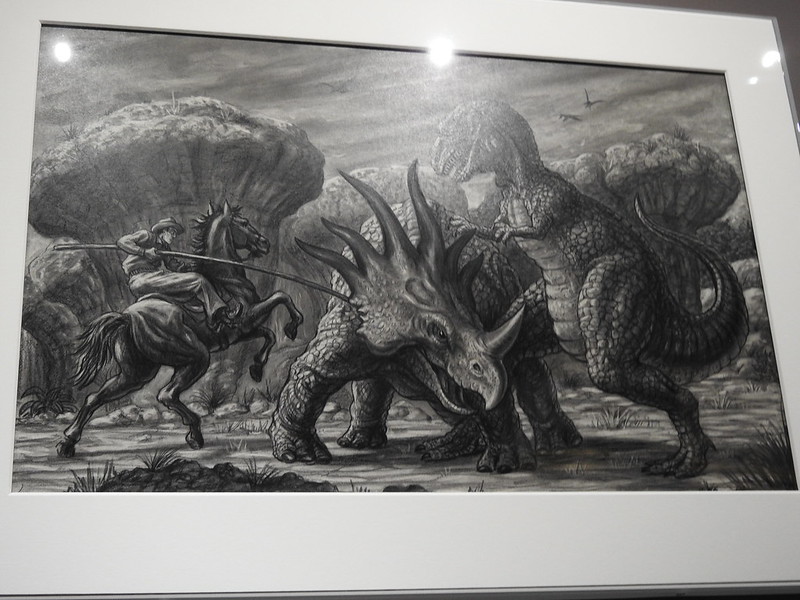 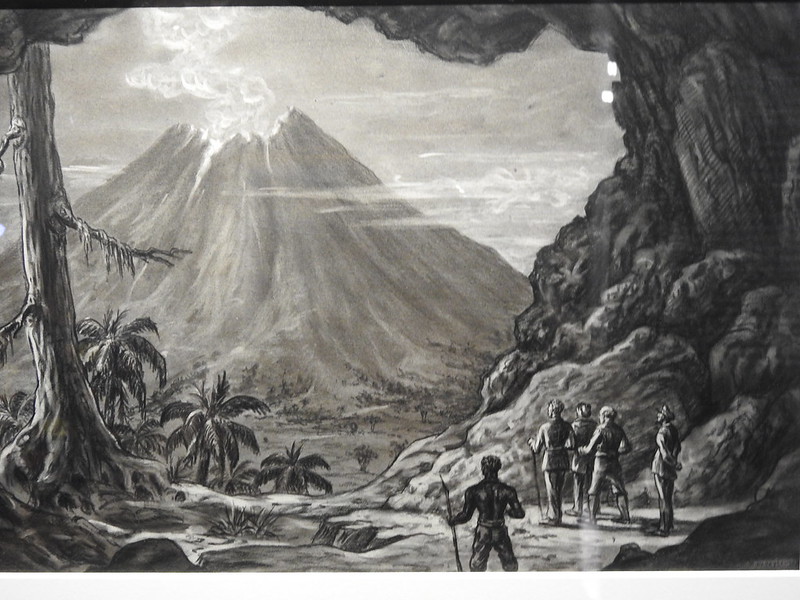 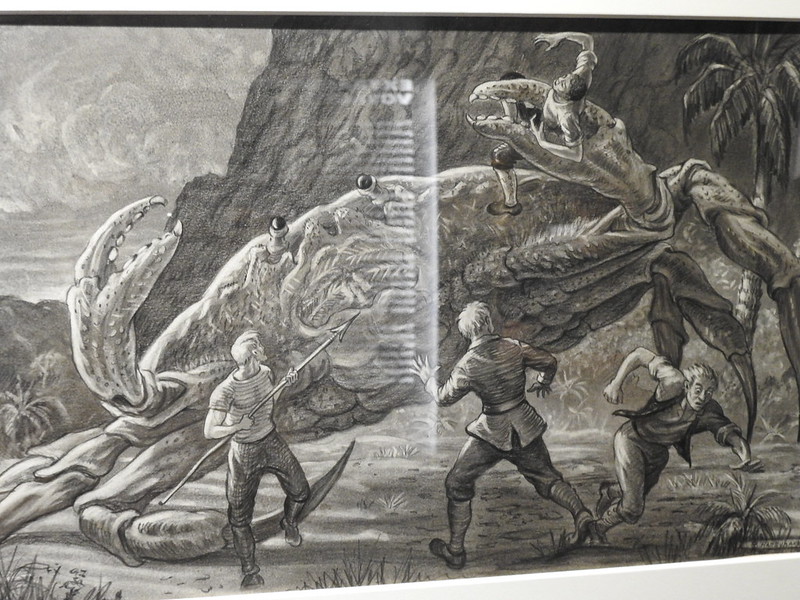 Stepping beyond the glazed panel doors (they didn’t make a Star Trek “swoosh” noise, unfortunately – a missed opportunity?), you are thrown into the formative years of Science Fiction, with artwork and first edition books on display. – there is a video screen playing George Méliés groundbreaking A TRIP TO THE MOON, with a viewfinder nearby showing another of Méliés’ work, but this time in colour. The tone is set.

Turn around and you are confronted with some of the clay model dinosaurs from Ray Harryhausen’s films. While rather nice to look at, there is no display tags or any explanation as to which films they appear in. Also, there is a feeling that you’ve missed a whole section of the exhibition by going from very early sci-fi work straight to Harryhausen, followed by real props from modern era films such as THE WAR OF THE WORLDS, STAR WARS ALIENS and STARGATE. Everything feels disjointed. What happened to the 1920s/’30s/’40s? Were they not particularly science fiction-y or something? 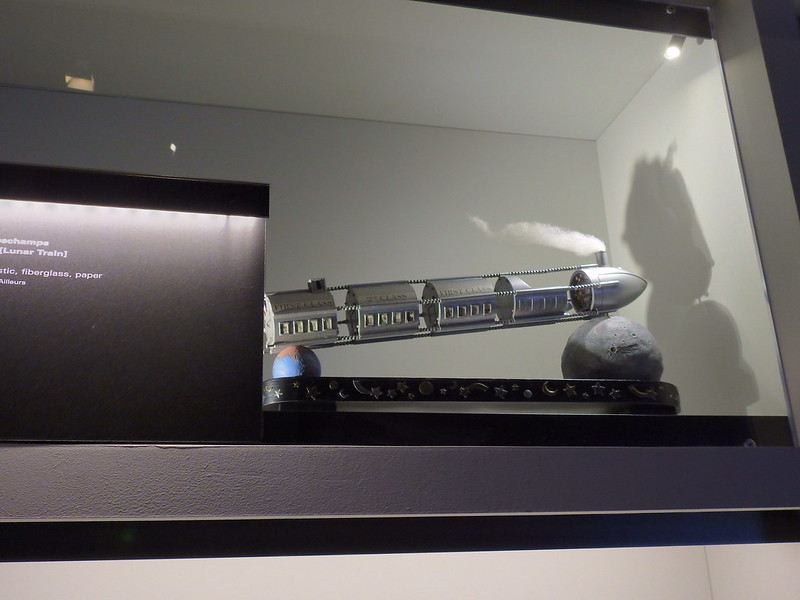 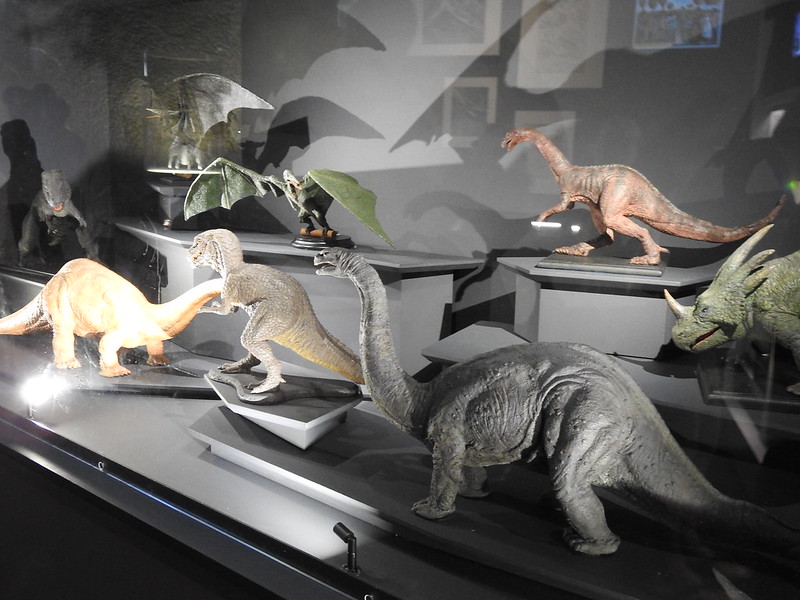 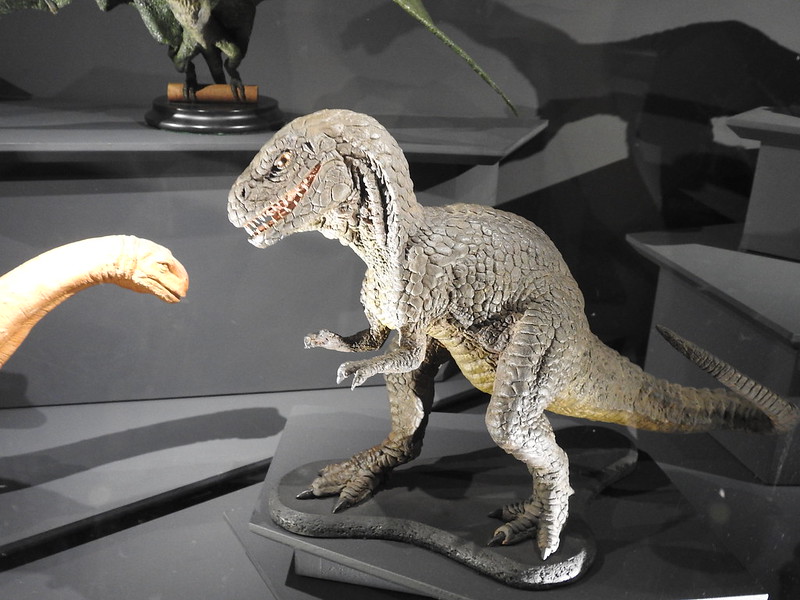 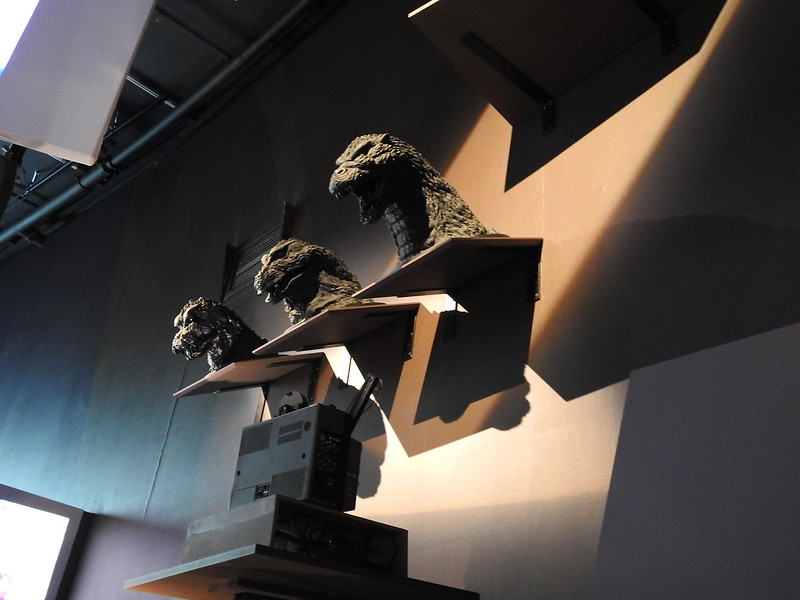 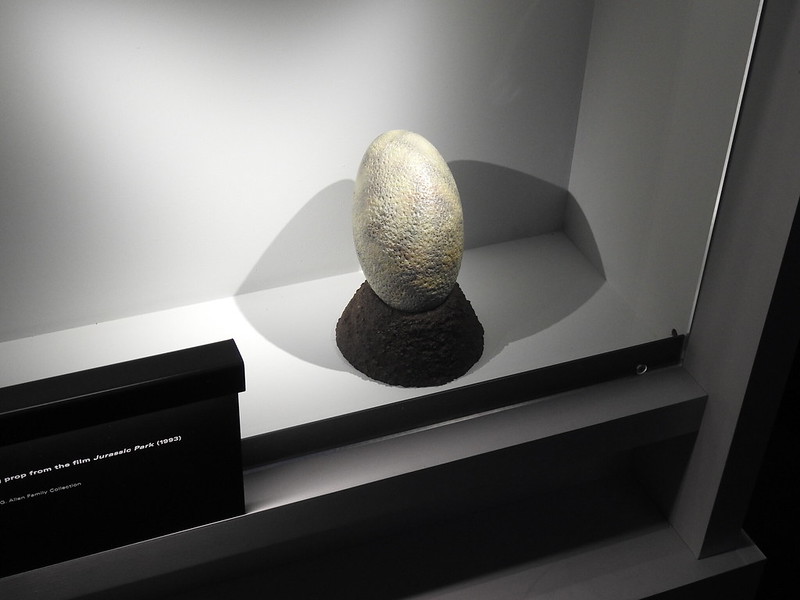 To be fair, it is great to be up close to some of the original film props because you get to see what these outfits were really made of (spoiler: John Hurt’s space outfit for ALIEN used cricket leg pads). Further space suits from contemporary cinematic hits MOON and INTERSTELLAR are on display, along with scale models of sets from classics such as SILENT RUNNING and THE INVADERS. However, again, there is a continued problem when trying to find out what film each item is related to.

The plaques on the wall are not next to each item; instead, they are away from the exhibits and at the far end of the wall, so it’s only after you have seen the items that you get to find out what Sci-Fi film and/or TV show they are from. Also, the plaques don’t give pointers as to which item is which., they are just a list of names and descriptions, which is great if you’ve seen the film/TV show and can recognise them yourself but not so great if you have no idea about anything in the section. It’s difficult to place the items with their corresponding descriptions, and it’s a constant theme running throughout the entire exhibition – incredibly frustrating. 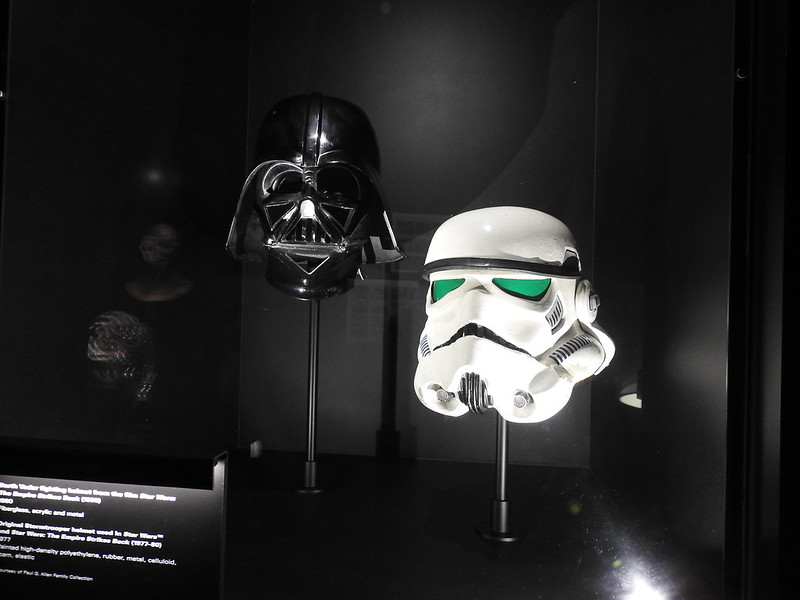 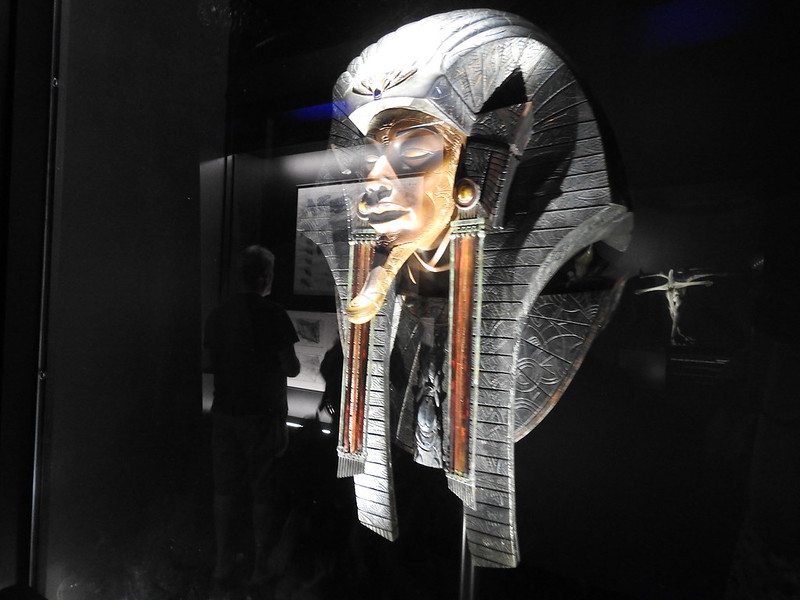 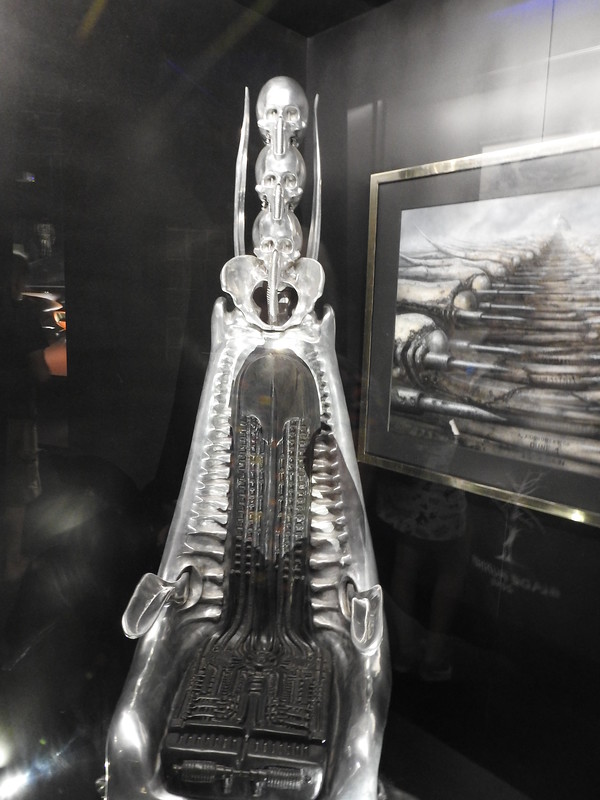 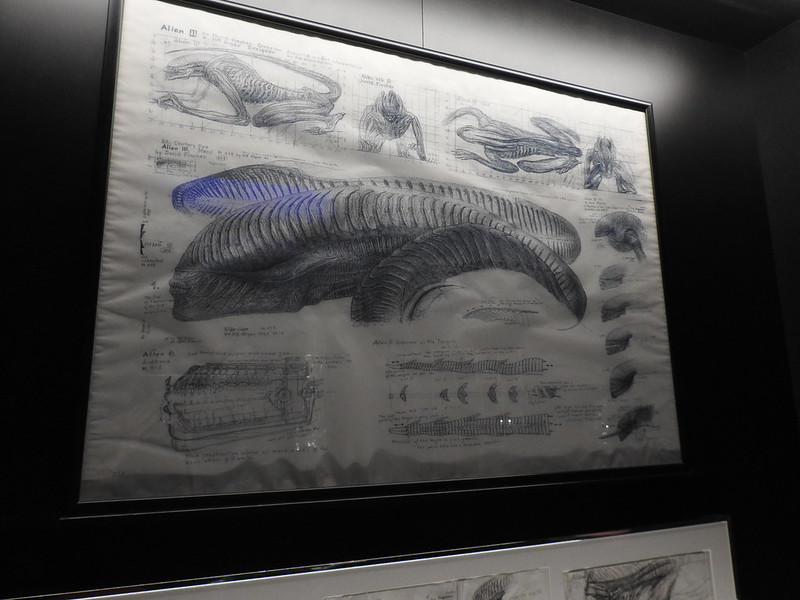 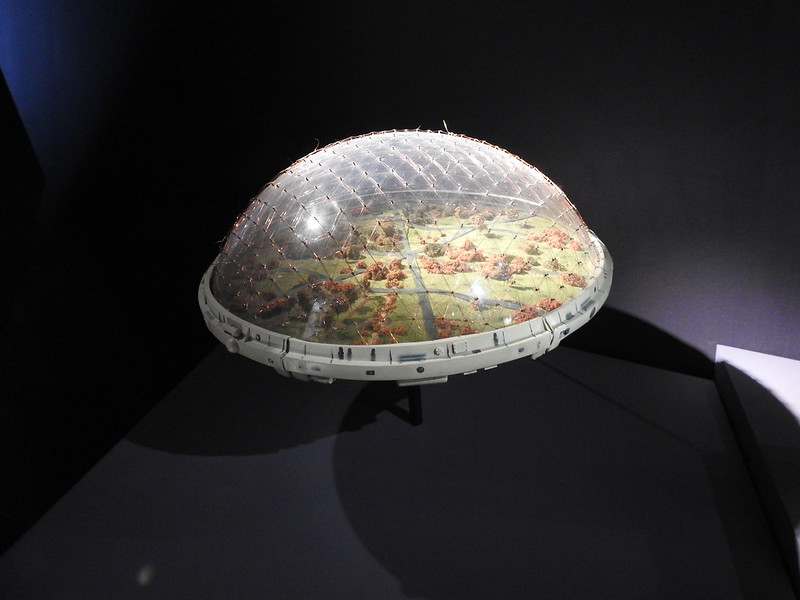 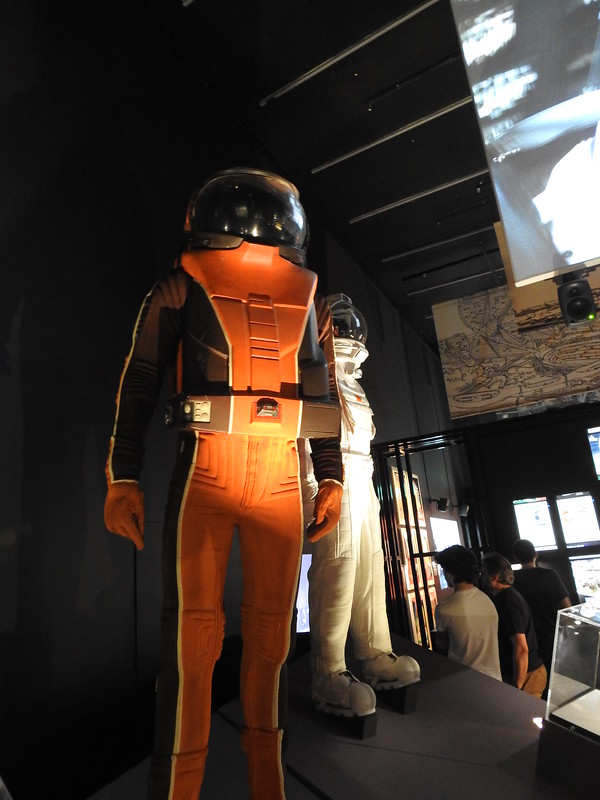 You eventually reach the last section of INTO THE UNKNOWN and greetings come from a large video screen showing clips from Danny Boyle‘s zombie apocalypse film 28 DAYS LATER, but oddly enough only the eerie scenes of Cillian Murphy walking the empty streets of London. It’ very unnerving to have Murphy bellow “HELLO??” at you as you pass – twice as much as he continues to do so as you’ve moved on past the screen and kept going!

The walls of the last section are lined with first edition books such as Richard Matheson’s I AM LEGEND, Philip K. Dick’s DO ANDROIDS DREAM OF ELECTRIC SHEEP? and other genre defining works, including many Russian editions as well. There are displays of early comic books, which have seen better days; original artwork from THE IRON GIANT animated movie; an auto-encoded version of BLADE RUNNER by Terence Broad (which is a version of the film seen through the ones and zeros of a computer, a strangely hypnotic piece as waves lap across the screen – you can vaguely make out Deckard talking to Kowalski). Again, a total mish-mash. 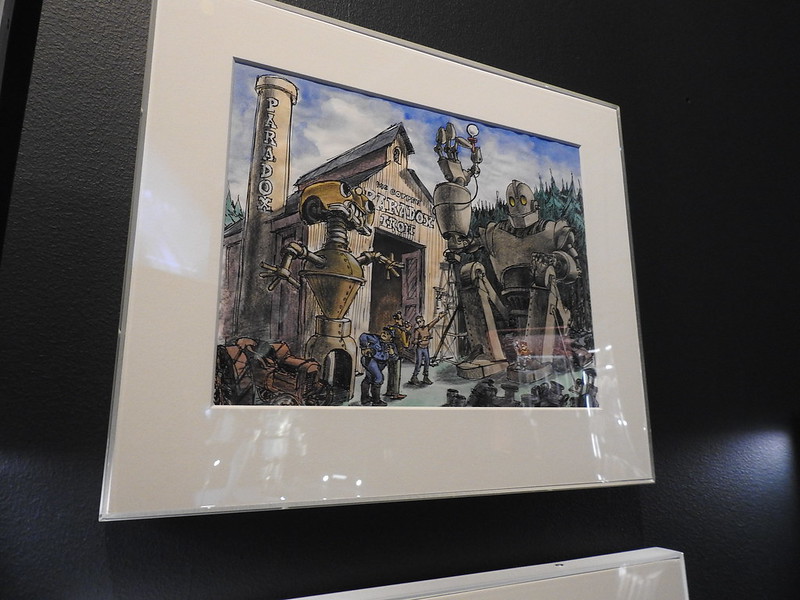 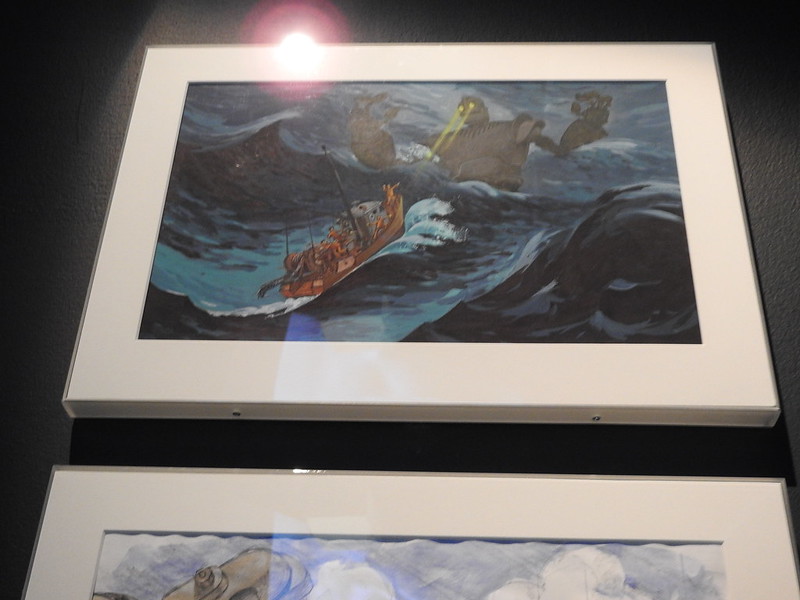 In the centre of the room, there is a platform holding four iconic robots from TV and film – Twiki from BUCK ROGERS IN THE 25TH CENTURY, Robot from LOST IN SPACE, Sonny from I, ROBOT and TARS from INTERSTELLAR. All of these are the working models and have been through the wars – Twiki is badly damaged and Robot has famous autographs on his backend. Sonny looms over you like it is ready to pounce and you get to see the inside of TARS (still a fully functional machine). 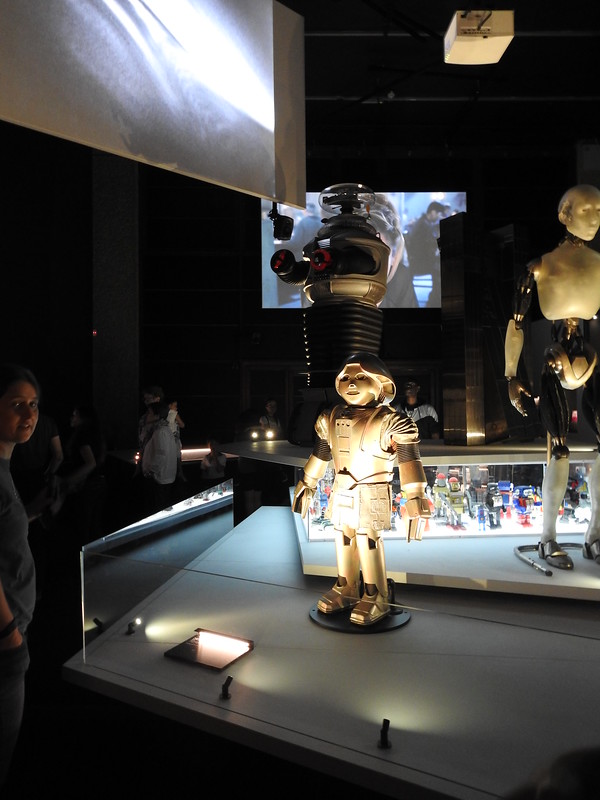 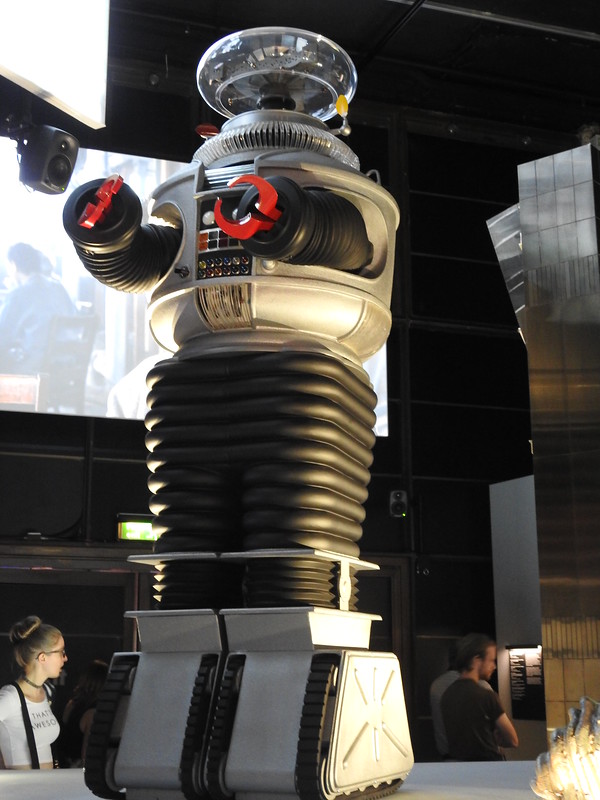 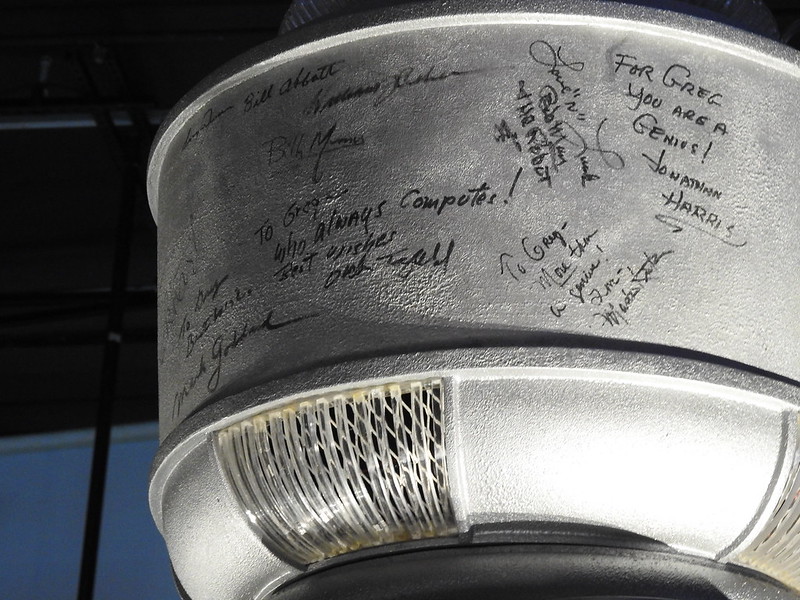 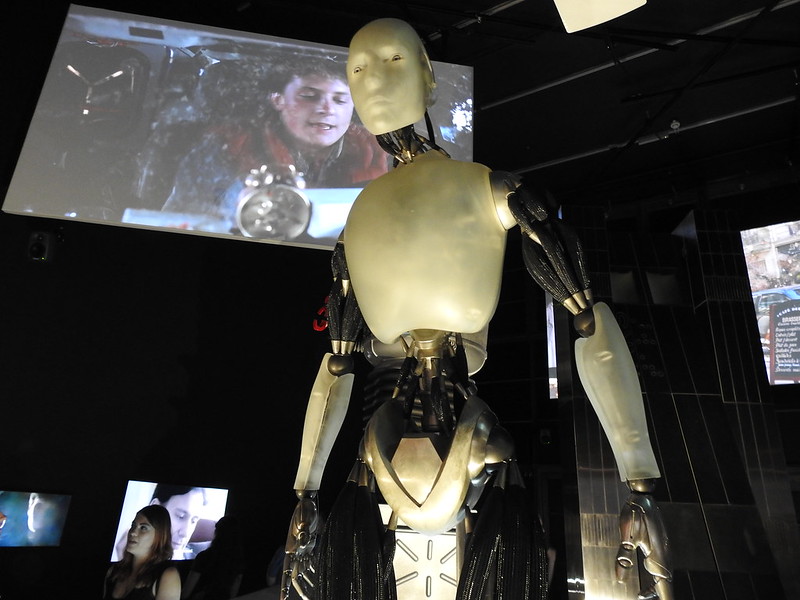 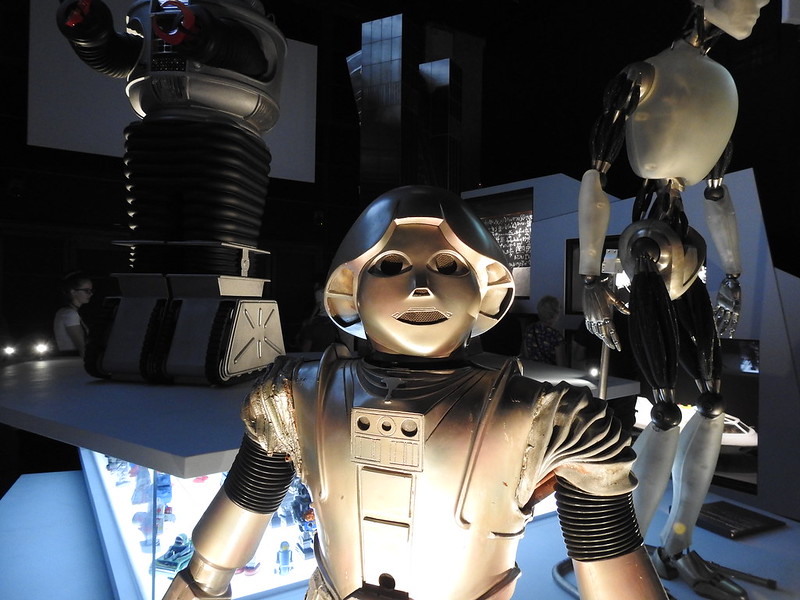 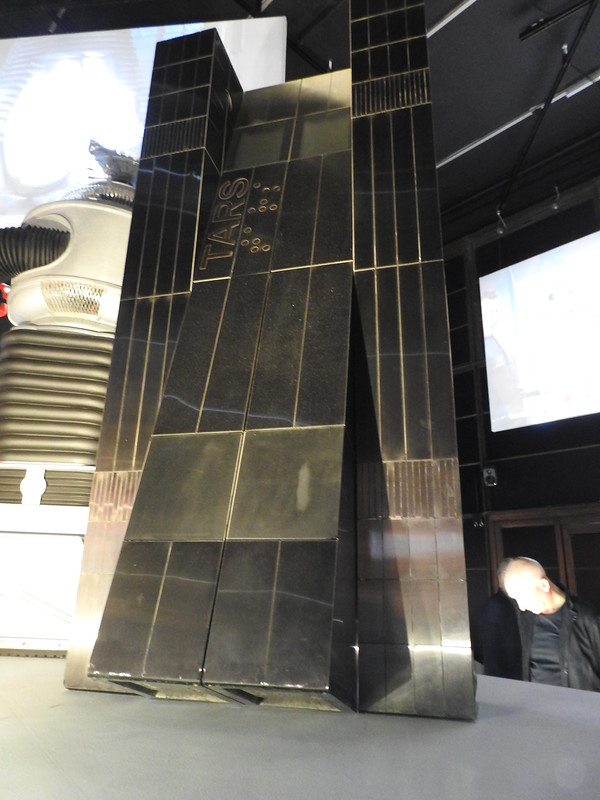 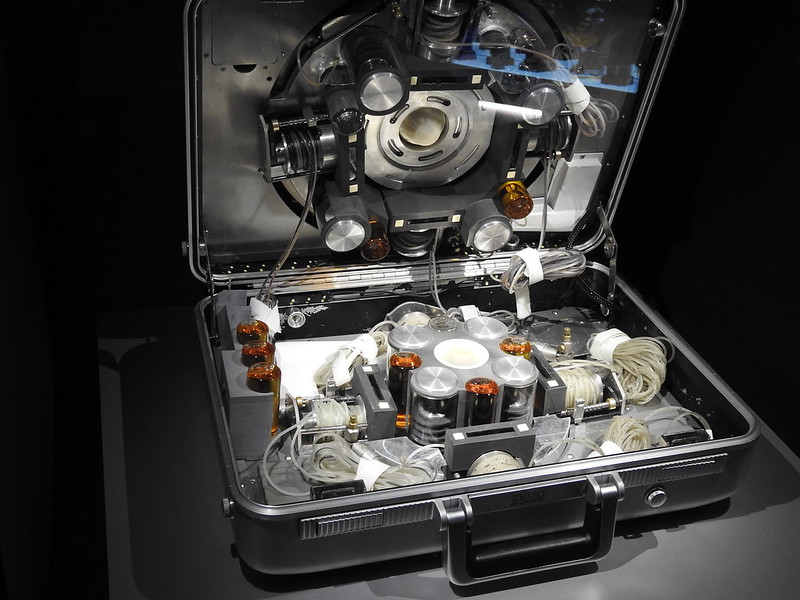 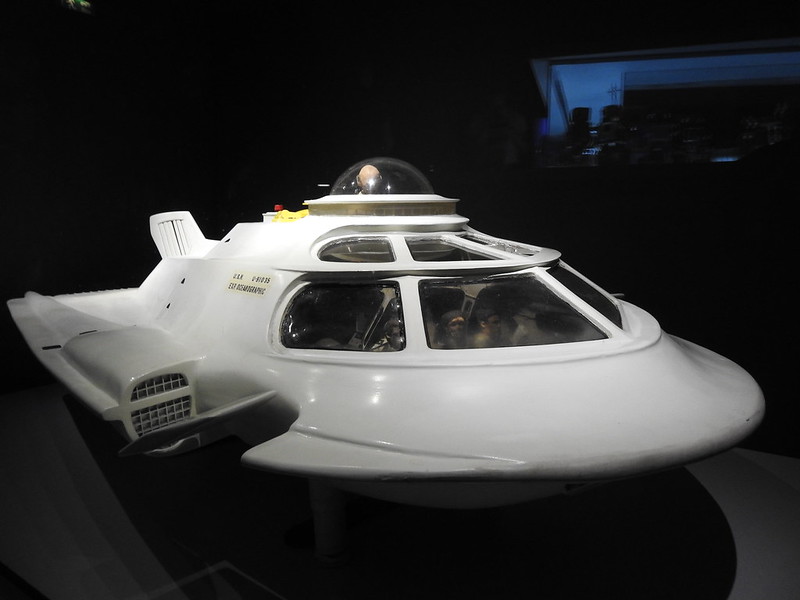 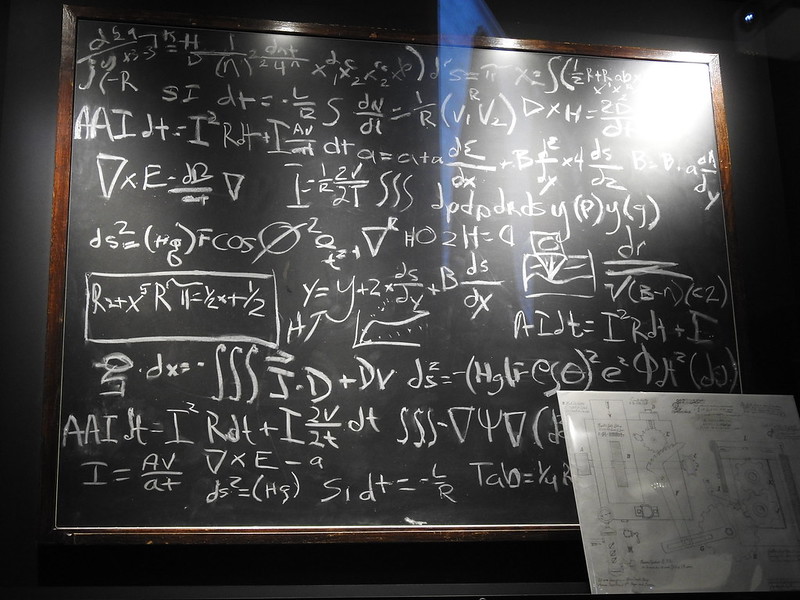 INTO THE UNKNOWN: A JOURNEY THROUGH SCIENCE FICTION is an exhibition that both astounds and annoys in equal measure. Some of the work on display is so legendary that it’s a privilege to see it – H.R. Giger’s original concept art for ALIEN and Jodorowsky’s sketches for his unrealised version of DUNE are particular favourites – but, with a layout that is essentially in a hallway and information plaques located in all the wrong places, it becomes a bit of challenge to fully immerse yourself into the world of Science Fiction.