In response to the Hollywood writer’s strike of 2007-2008 a small and quirky… er… show(?) appeared on the internet. Dr. Horrible’s Sing-Along Blog gave an outlet for King of the Nerds Joss Whedon and his brothers Zack & Jed along with Maurissa Tancharoen to create a fun story about a superheroes battling a wanna-be super-villain. It broke the internet way before Kim Kardashian even knew there was an internet and showed that even in the most of unlikely situations creators can create, and create something huuuuuuuuuge.

Dr. Horrible (Neil Patrick Harris) is not only trying to take over the world but also win the heart of Penny (Felicia Day). Horrible is aided by his minion Moist (Simon Helberg). There is one man stopping the evil Dr and that man is Captain Hammer (Nathan Fillion).

Ten years after the phenomenon that was Dr. Horrible, Joss Whedon was joined on stage in Hall H by Felicia Day and Nathan Fillion to discuss the everlasting appeal of one of the maddest musical comedy-drama series ever to be made. 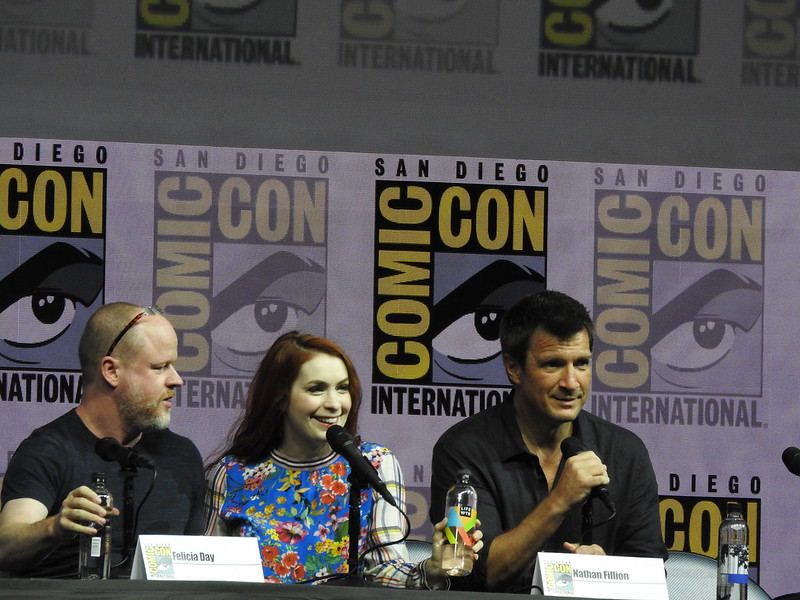 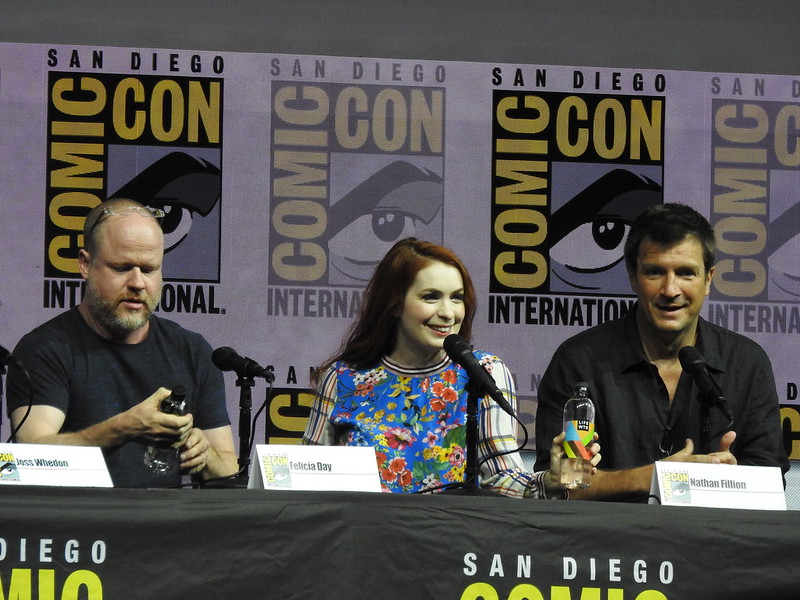 Felicia Day admitted to the time she went to the Korean bakery next-door to the set and bought the cast & crew lots of gummy sweets. It gave everyone “the poops” that night. 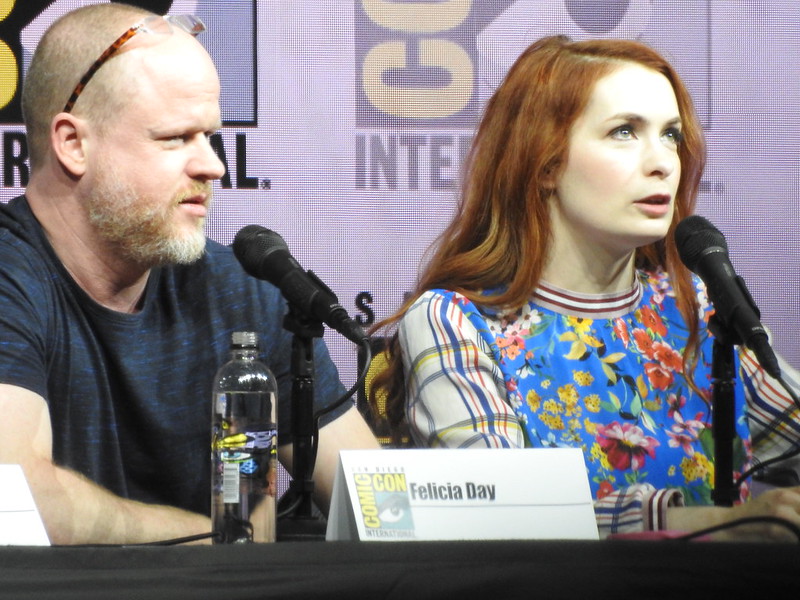 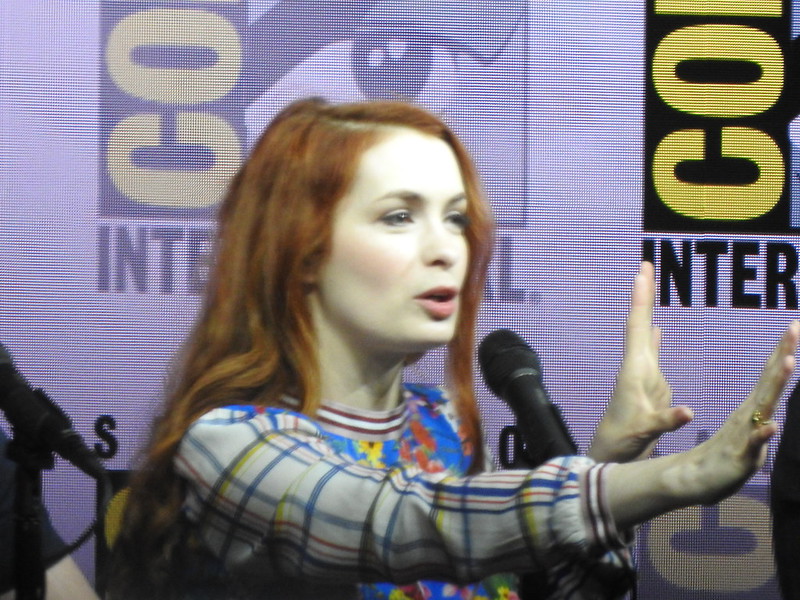 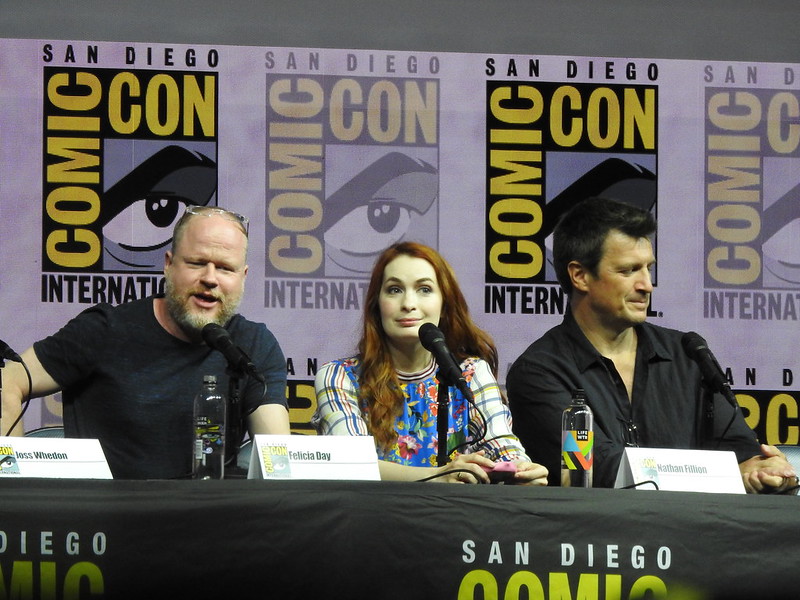 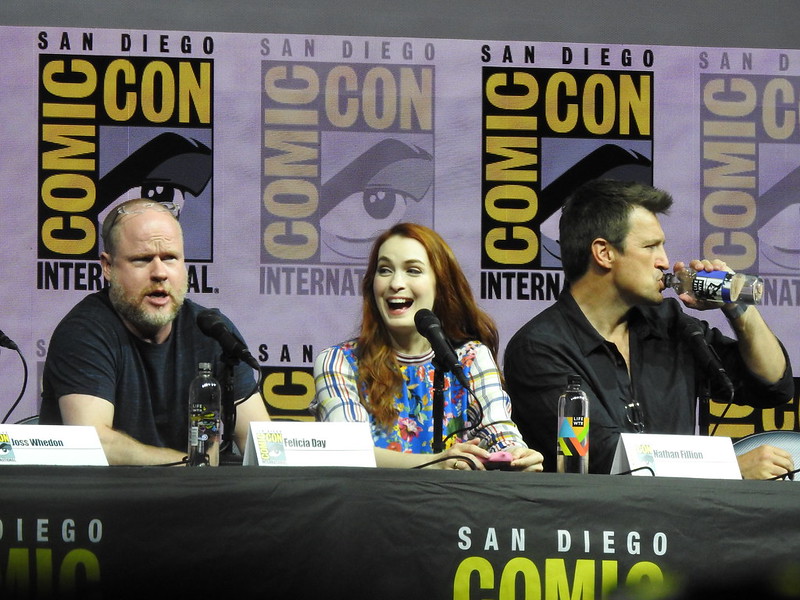 When Nathan Fillion was asked about the eccentric nature of his character Captain Hammer he said “I have a very difficult time making people laugh. I find it super easy to allow people to laugh at you. So the vanity, the think-you’re-smart-but-you’re-not is like a goldmine.” Whedon chipped in with a story about Fillion “I got a message from Nathan one time, when we were doing press for Serenity, and we had similar outfits on. We had t-shirt and jeans and I was like ‘I’m like you’re sidekick – Muscle-Man and Brain-Boy.’ Month’s later I get a [voice] message on my phone that just said ‘Muscle-Man to Brain-Boy! Muscle-Man to Brain-Boy. The Earth is in trouble. With your brains and my not-so-brains we can save the day’. I kept it for three months” 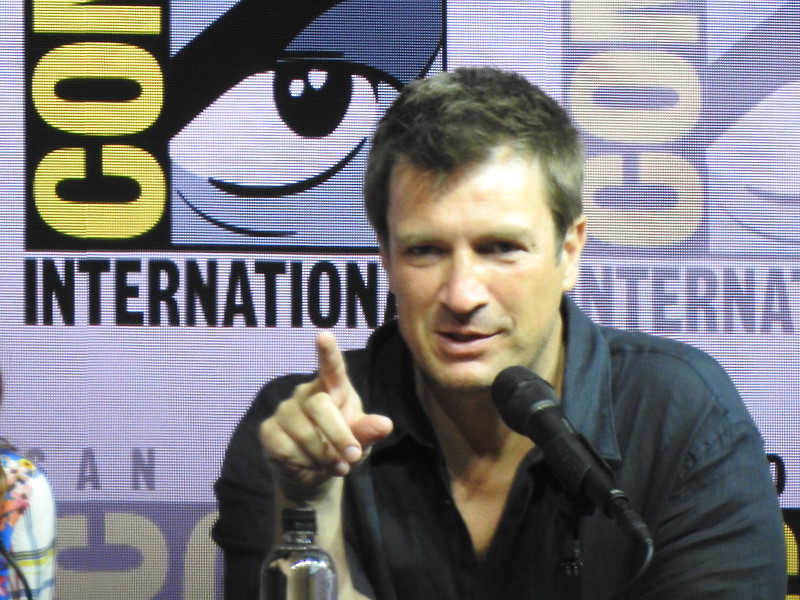 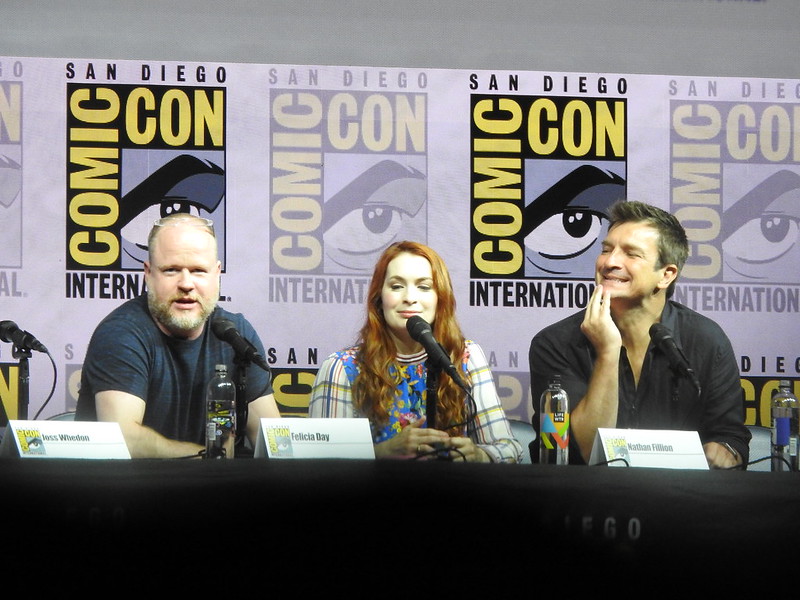 Asked about their favourite Dr. Horrible song, Day said “My Eyes is my favourite.” 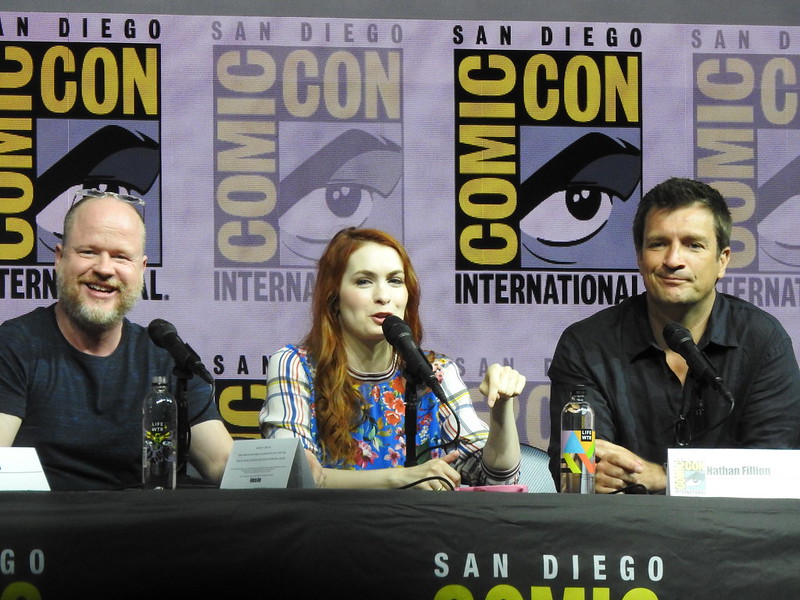 Fillion admitted that when he appeared on American Housewives playing himself at a convention he managed to convince the prop guys to give him the replica Serenity spaceship. It now hangs on the South wall of his garage. 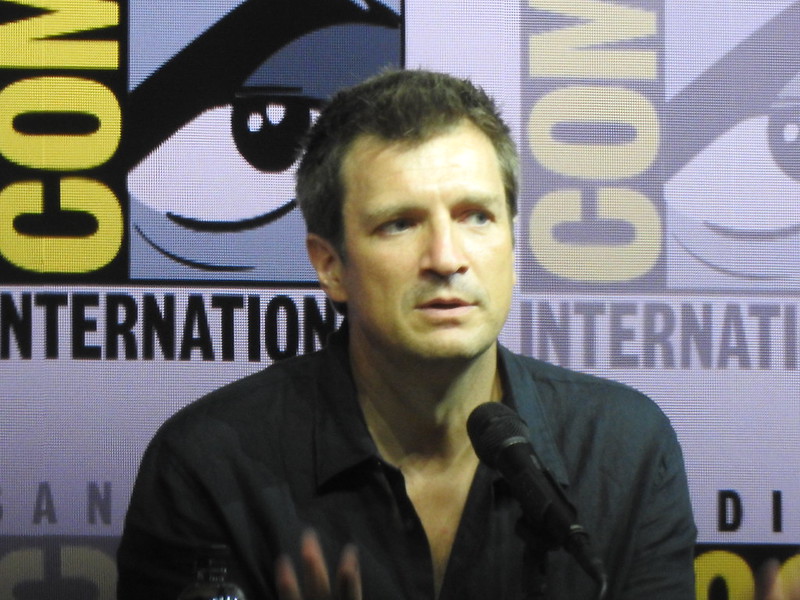 Whedon gave an interesting tidbit about directing The Avengers. He told the audience that when they were filming Downey Jr.’s face in the Iron Man suit they would have Downey Jr. lay down in a massage chair and shoot a very tight close up of just his face “It was really labour intensive. It’s kind of exhausting as there a lot of lines and then it’s over here [points to the left] then it’s over here [points to the right]. Now you are reading this on your monitor.” 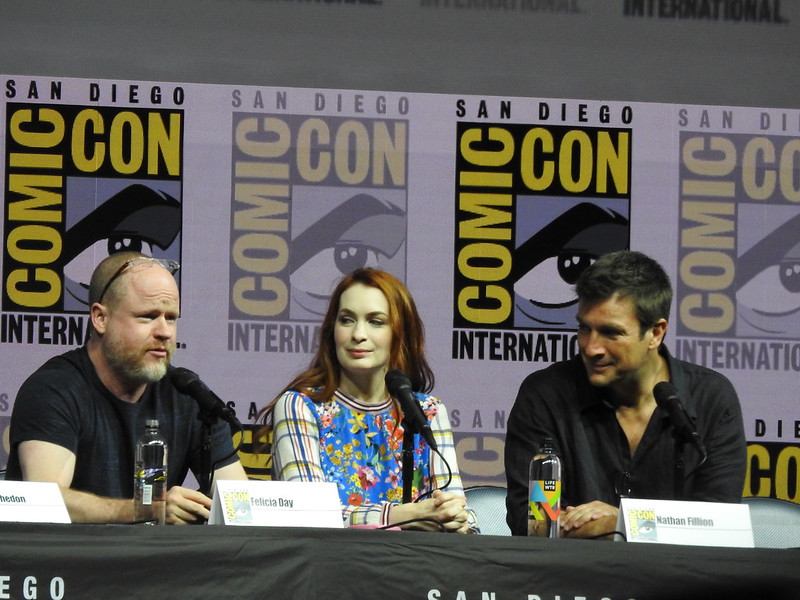 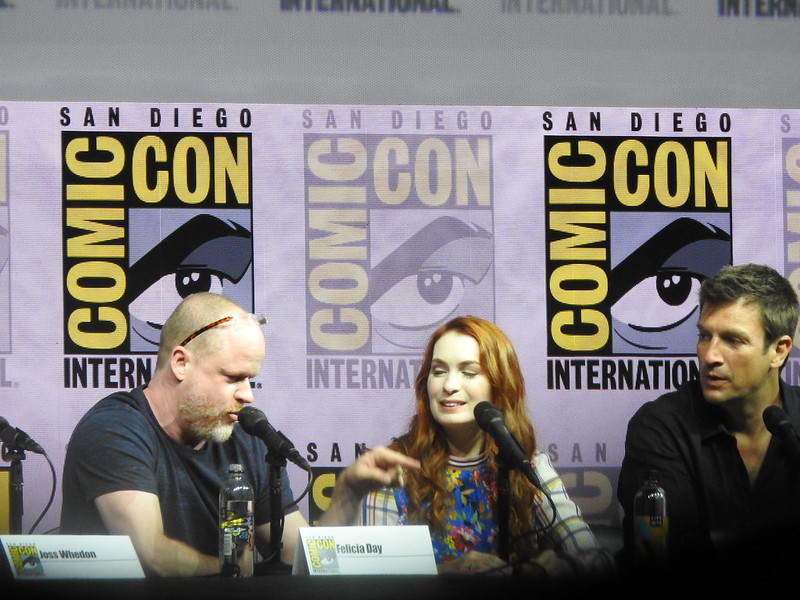 Whedon was asked if, during the filming of Dr. Horrible, he ever felt like giving Fillion the middle finger. “At some point I just taped it up. I got a splint.” Fillion replied to say “There is a lot of sit-down-and-wait time. It was long hours and that was one of the ways I would entertain Jewel [Staite]. That’s just one of the ways Jewel and I say ‘Hey, I miss you. What are you doing? I think you are great… if you like eating horseshit.’ That is one of the other ways I would tease them. Pay them a very sincere compliment and then wrap it up with ‘… if you like eating horseshit’.” 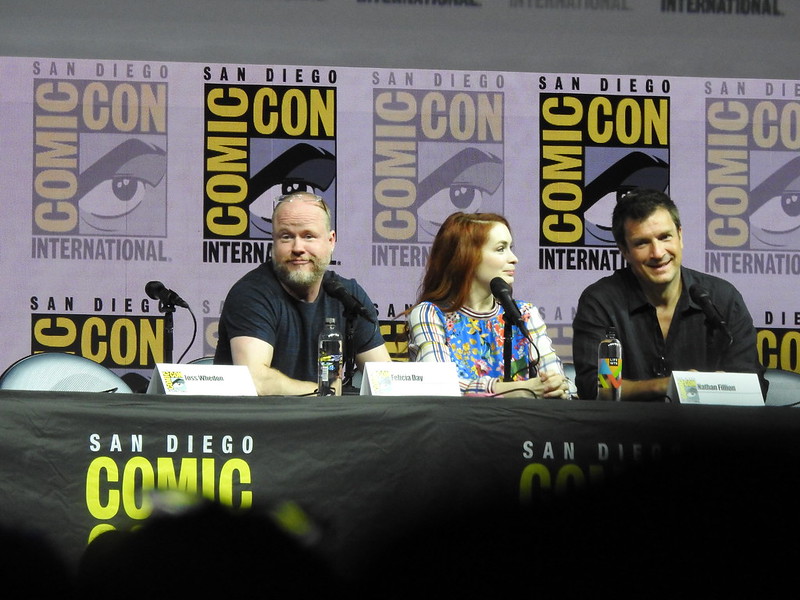 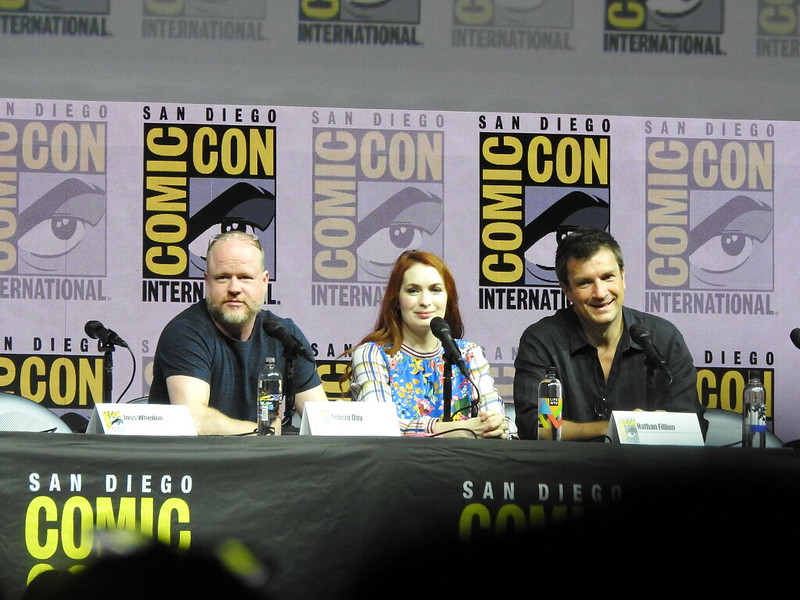 The panel finished with Fillion talking about the lasting legacy of Dr. Horrible “I think the worst thing in the world would be to pour our hearts and souls into something and create something and then have people forget about it. here we are ten years later and we are all still celebrating this little internet piece of magic.”

The whole panel was just a ruse to (briefly) plug a new Dr. Horrible comic written by Whedon. It will be released on 14th November from Dark Horse comics. The ruse worked… Damn you Dr. Horrible!