Now into its third season, Preacher is on of the most underappreciated shows on TV. Adapted from the comic book series by Garth Ennis and Steve Dillon by Evan Goldberg, Seth Rogan and Sam Catlin. It stars Dominic Cooper (Mamma Mia: Here We Go Again), Ruth Negga (Loving) and Joseph Gilgun (This Is England) as a ragtag bunch following Jessie Custer, a hard-drinking chain-smoking Preacher who is infused with extraordinary powers. 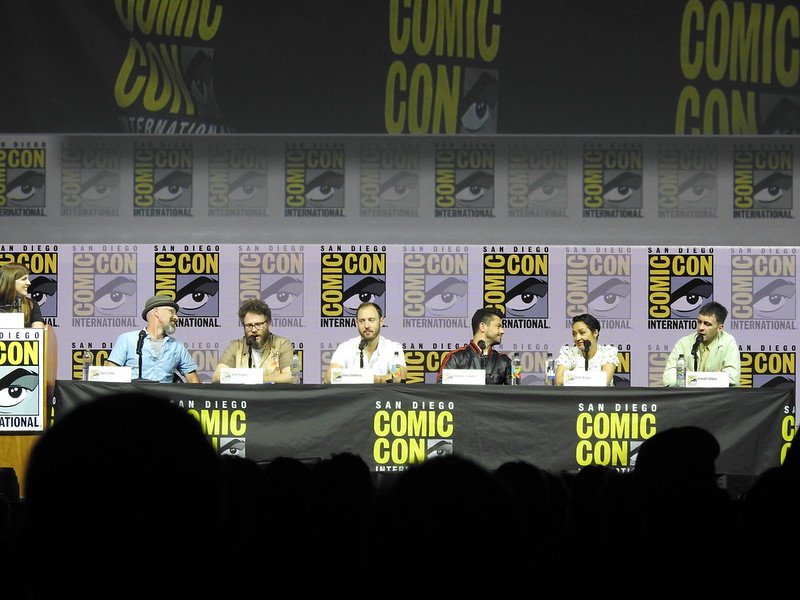 Sadly, by the time Preacher arrives at SDCC the show is halfway through it’s current season so discussing what is yet to come is a big no-no. However, this panel doesn’t need to really discuss the show. Just give them a microphone and let them loose. Rogan, Catlin and Goldberg briefly spoke about what had already happened in the current series before turning the attention to the cast. That’s when it got hilarious. 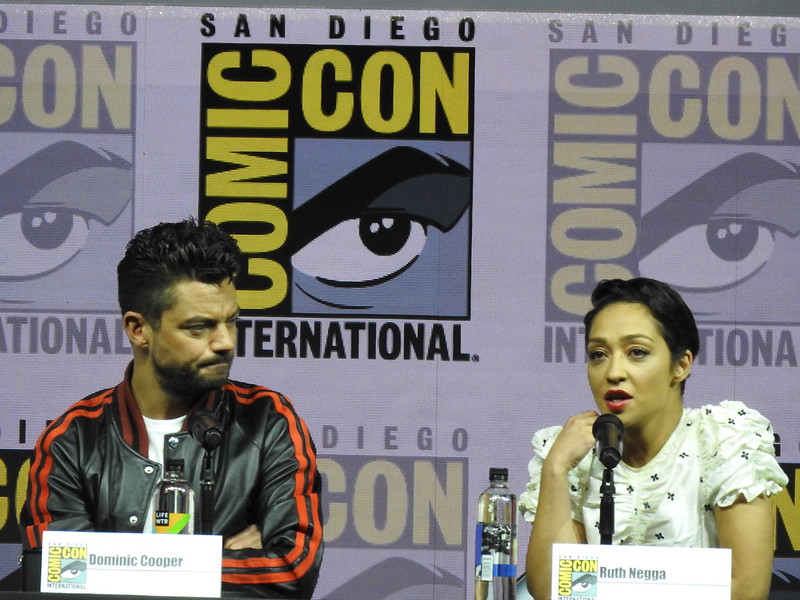 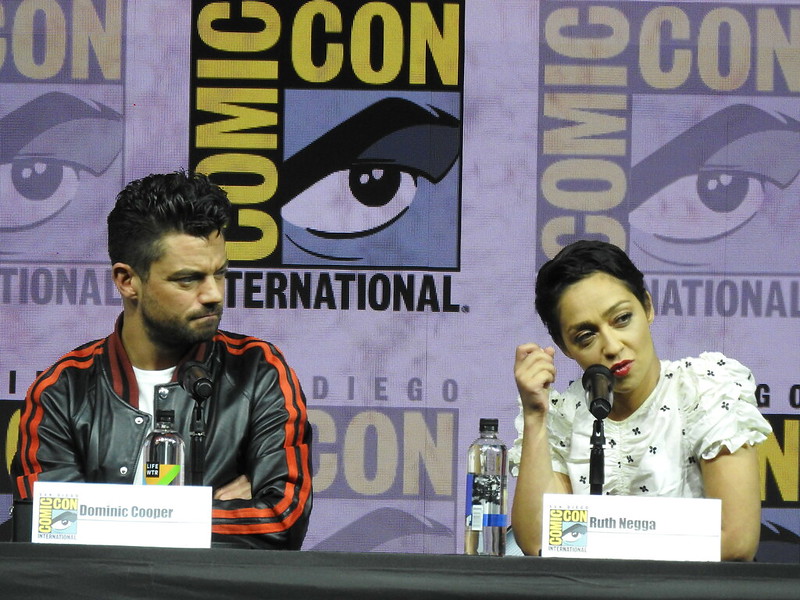 Negga talked about the fight scenes she is involved in during series 3: “What I quite like is the peculiar weapons she is involved with. It is always something really unexpected. She gets very creative. Well, actually the writers got creative and I followed through. They are very tongue in cheek fight scenes and so funny to do.” 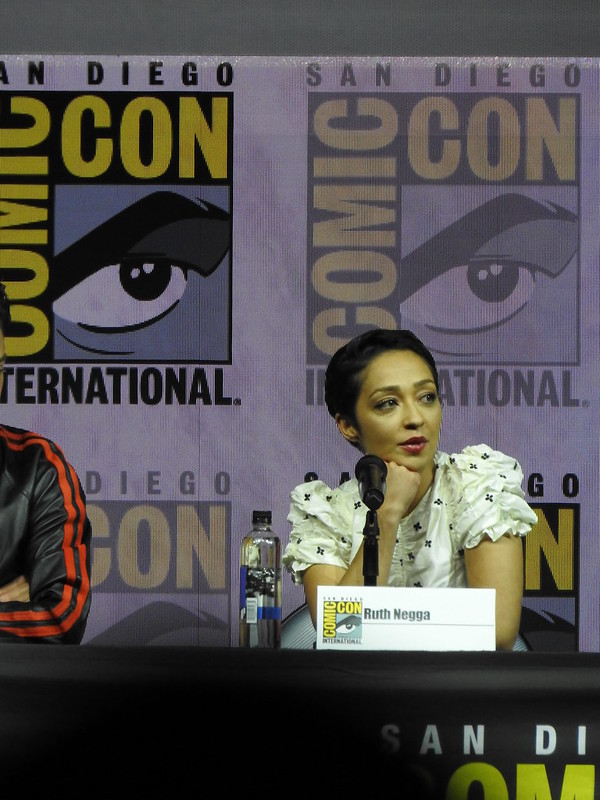 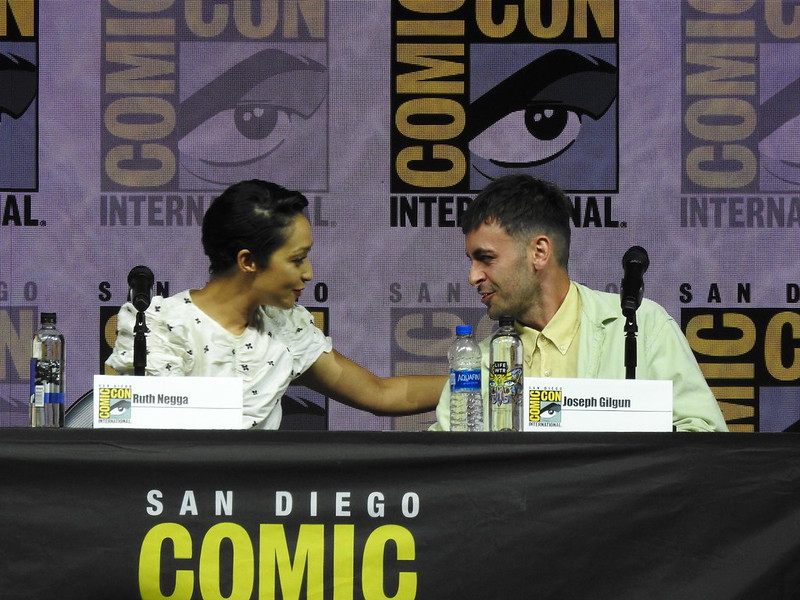 Gilgun‘s first time talking was not to answer a question about Cassidy but to ask “Is there really seven thousand people in here [Hall H]?” To which a huge scream went up. “Fucking hell, it’s terrifying” he responded “We could really fuck shit up if we all went out together. I tell you what we should do, we should all just meet in one bar after this. Let’s say 9 o’clock we all go to the same fucking place and just tear it up. Imagine that.” A short while later, as Gilgun was talking about learning his fight scenes in a car park he stopped to show everyone a bite on his leg that he got from a large bug “That is always going to be with me. That is never going. The fucking creatures out here are not to be messed with.” 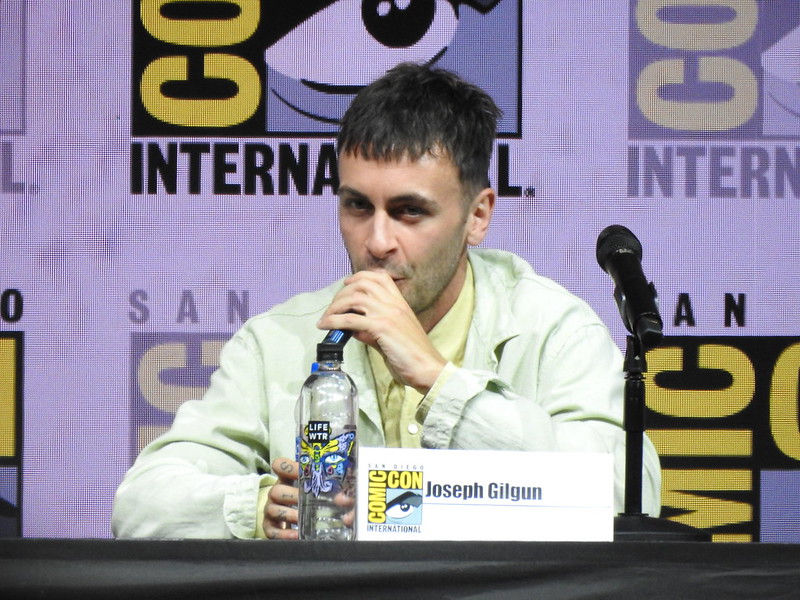 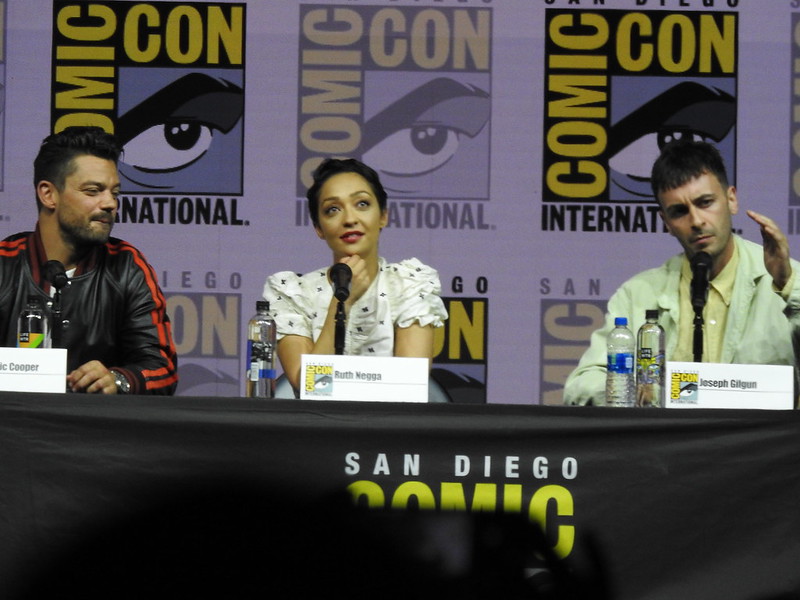 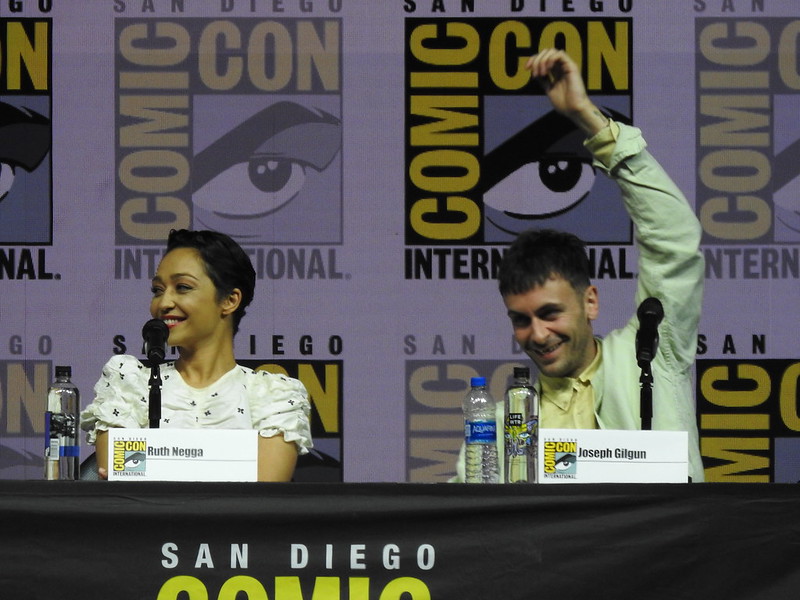 When asked what we can expect with Cassidy during season 3, he replied “A lot of sexy vampires. I get a haircut… which is nice. Er…. I don’t how much I can tell you without getting fucking bollocked. Every year I kind of ruin Preacher… nearly… I have to pull it back desperately. I mean, what can I say? There is a lot of vampiric stuff going down.” 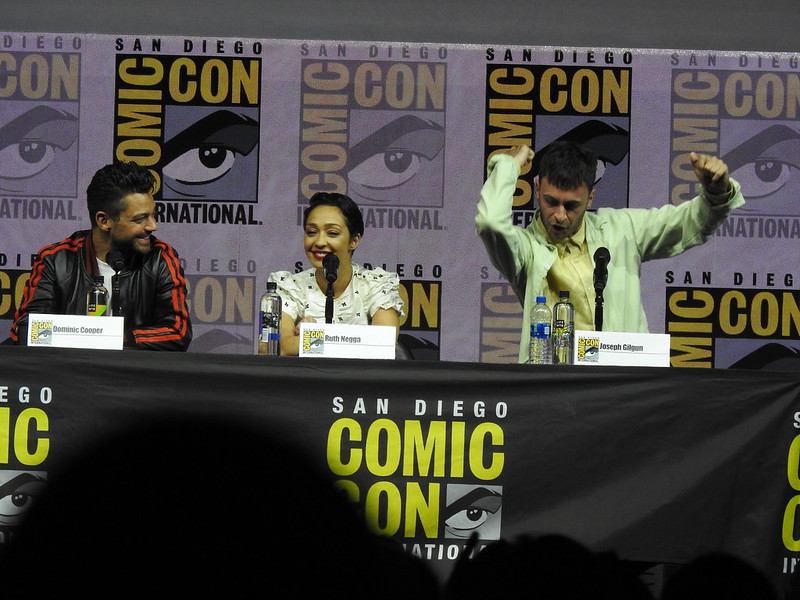 Rogan did mention the rescue of Eugene and Hitler “Who works at Subway now. Who works at our legal to clear version of Subway.” When asked how do you write for Hitler, Rogan said “You just go on Twitter.” 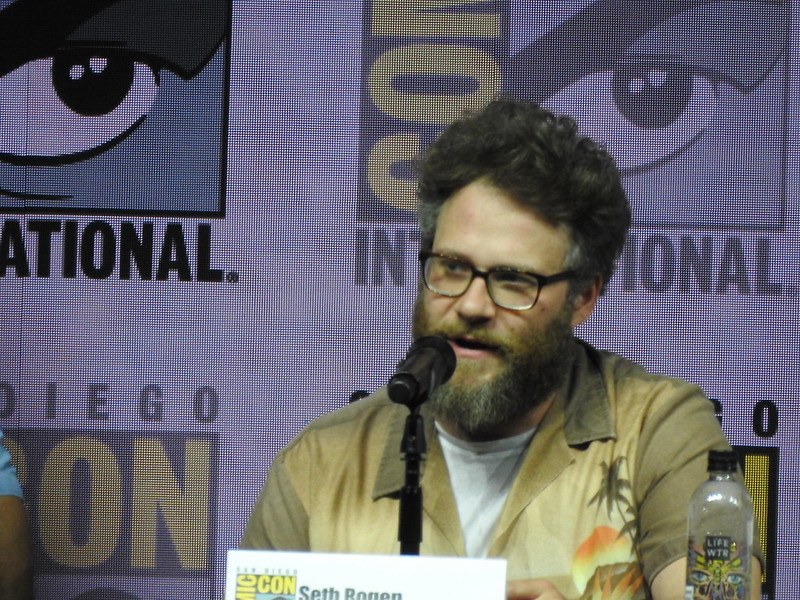 Things got heated on the panel when Cooper talked about having to film a scene where he is in a coffin and lowered into the water. Rogan said “There is literally no need to film that.” Cooper continued “But you wrote it!” Catlin asked “But not with you in it [the coffin while filming the scene]?” “YES!” replied Cooper getting increasingly incensed that he did a dangerous stunt for no reason “I was underwater in a coffin.” Rogan joked “I thought it was your acting like, Wow! He really seems like he is underwater.” Cooper, with a smile on his face, couldn’t quite believe that he filmed that scene for no reason. 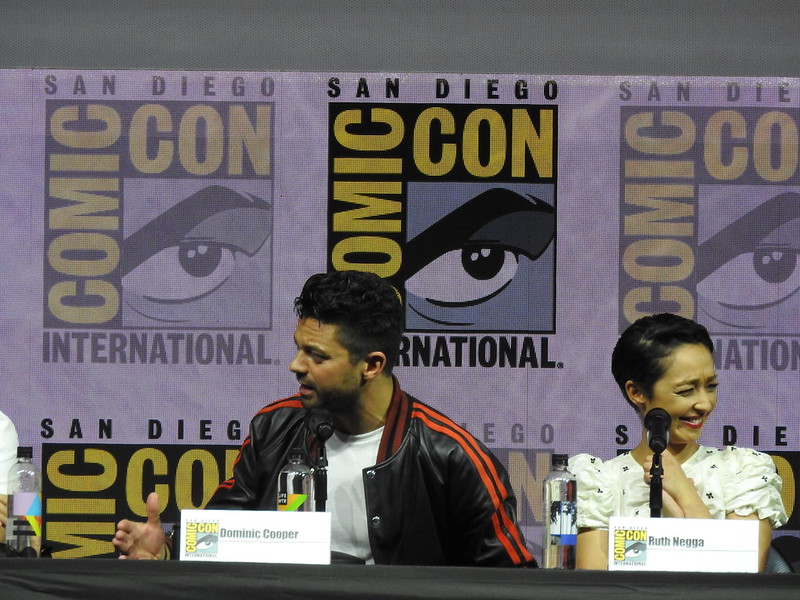 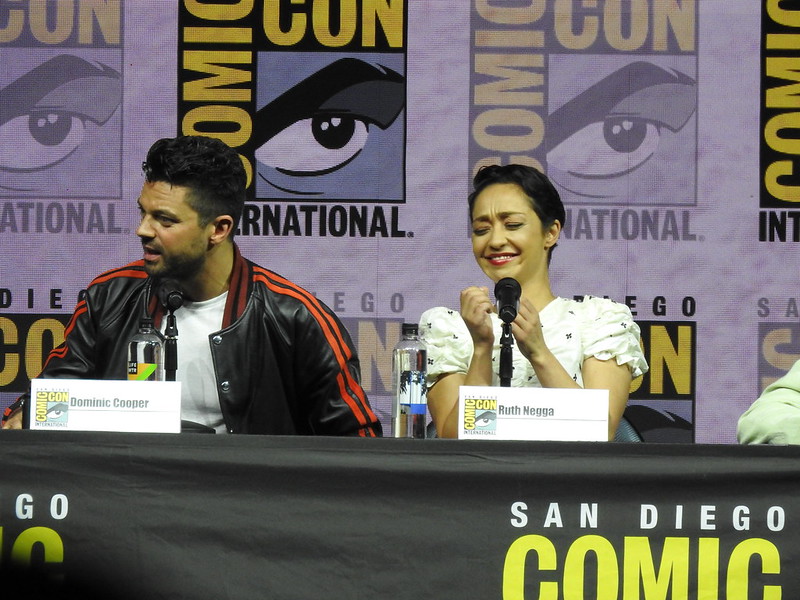 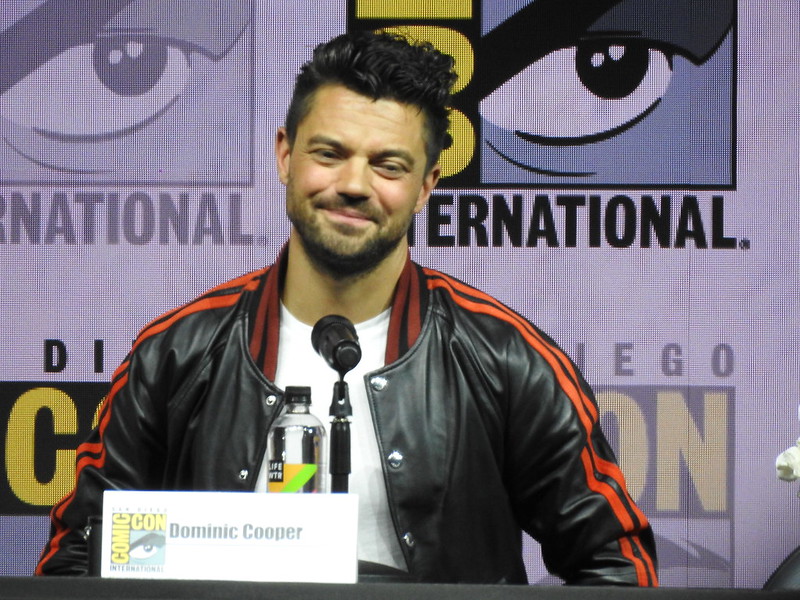 Caitlin expanded on the relationship between Jessie and Tulip, saying “At the end of season two Tulip asks Jessie ‘What do you need us for?’ and at the moment he doesn’t really have an answer. Season three is about all the characters trying to figure out how much they need each other. By the end of the season they are going to realise how much they need each other to survive.” 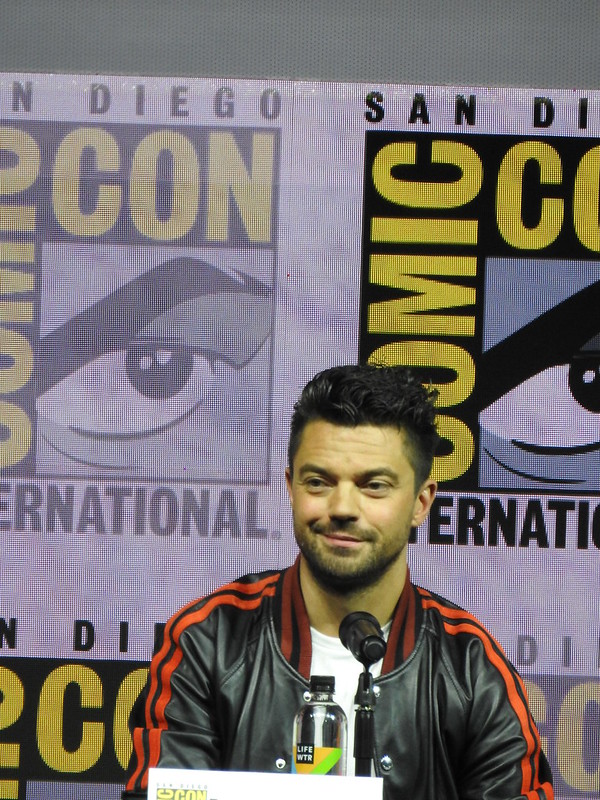