Heading out to San Diego Comic-Con as Press for the first time gave me the opportunity to meet and talk with some incredible people – but there was one man, and his loyal production team, that I really wanted to say hello to: multi-hyphenate and pop culture guru Jon Schnepp who has spent the last five years putting together an exhaustive examination into one of the most legendary abandoned projects in film history.

Superman Lives, the attempt by Jon Peters and Lorenzo di Bonaventura to resurrect the character of Superman in the mid-90’s, only to close down production two weeks before shooting, would have been the most radical departure from the classic icongraphy of the character ever committed to film. Originally from a script drafted by Clerks/Chasing Amy‘s Kevin Smith, featuring ground-breaking costume designs from Oscar-winning legend Colleen Atwood and having, in the lead role of Clark Kent/Kal-El, Nicolas Cage, the production faded into lore as ‘the one the internet nerds were really glad that got away’.

Schnepp was determined to peel away the layers of misconception and hearsay about the film, talking to the majority of the people involved and looking into the motivations to present such a epic take of the Siegal and Shuster slice of Americana. Now, with a completed documentary under his arm, he brought the film to where it first got announced, at San Diego Comic-Con – and with its own booth, no less.

The finished film feels very much like a renegade, peeking behind the curtain of Hollywood machinations, and so – like that renegade – I defied the official CCI rules, set up my banned selfie stick, plugged in my roaming microphone and grabbed hold of Jon Schnepp at their booth, battered and bruised after a long and hectic Comic-Con.

Now, this was my first attempt at ‘one man band’ interviewing – indeed, my time of the booth was only my second ‘interview in the field’ ever, so there are some rookie mistakes such as concentrating on the video framing instead of checking where I’m supposed to be pointing the mic! In the plus column, Jon, Holly Payne (documentary producer and Schnepp’s partner), composer Frederick William Scott and segment animator Jason McLagan graciously didn’t make me feel like a complete amateur (which I am!) and were very generous with their time to talk to me…

From the outset, The Death Of ‘Superman Lives’: What Happened? is a dare, looking you in the eye and determined to challenge any pre-conceived notions of what would have been Superman Lives eventual target audience: the film starts with director Jon Schnepp interviewing attendees of a comic book convention, presenting them with the now-famous Polaroid of a long-locked Nicolas Cage in a shiny, sleek and very modern Superman outfit.

Indeed, for those not entirely familiar with this Hollywood tale of inflated budgets, clashing egos and rampant imagination, this documentary does start with Schnepp presenting its case to the audience and asking it to join him down the rabbit hole of the making of Superman Lives (doing so in a very swish studio setup which must have cost a bomb to put together and is, perhaps appropriately, never seen again in the remainder of the documentary).

The main body of the documentary kicks off with the telling of the tale of Kevin Smith‘s participation in the project – called to speak to an increasing number of studio bods about his thoughts on The Man Of Steel and finally being presented with the opportunity to work on a screenplay draft. Smith actually takes up the lions share of the interview portions of the documentary: understandable, as the guy is quite the verbose storyteller and is a compelling narrator of his side of the story. The only other that almost matches Smith for screen time here is Jon Peters, a flamboyant film producer who would have been excused for feeling like he needed to defend himself after Smith’s numerous tellings of his encounters with Peters in his live Q&A’s. Peters, however, comes across as merely a very colourful character, one that may have been the archetype of a 90’s film producer in a bustling movie-making era but may be in short supply in today’s modern Hollywood.

Featuring interviews with many of the production team – gleefully regaling tales of being put into chokeholds by Peters, along with his constant demands for story additions which will render any Superman fan dumbstruck – the documentary is highlighted by interview footage with Batman director Tim Burton, initially coming to the project with a desire to take on a film with lighter, more optimistic tone. Also acting as a main draw for viewers is the staggering video footage of Nicolas Cage in numerous hotel rooms, testdriving the innovative and striking Kryptonian costume designs, featuring LED cabling and body sculpting. Rounding off the package is a veritable shit-ton of production artwork and photographs which just goes to show how close this Superman was to getting off the ground.

Some of this artwork serves the basis for some impressive stop-motion animation and studio recreation – they could’ve found someone who looks vaguely like Nicolas Cage, instead of what ends up looking like an intern in a wig, but if anything, you get the point of the clips on display. The sight of what Burton had planned for Brainiac remains a truly demented sight and worth the price of admission alone.

Ultimately, Schnepp proves to be an enthusiastic narrator, an archetypal fanboy revelling in showing off all the toys he’s gotten through for Christmas and inviting you in to play: an exhaustive treasure trove of production art, screenplay drafts, test footage and casting notes, a collection which, he admits himself, barely scratches the surface of what was actually produced. He may show some first-time directorial naivety in structuring the documentary – it ends up being is very much front-loaded and the whole thing flags as it reaches its dénouement (mirroring Superman Lives’ production itself, in that regard). He also uses Frederick William Scott’s music throughout the film as a constant ambiance which, once noticed, does distract from the viewing experience; the composer has wisely not attempted to create a memorable theme for the film itself – why should he even try, when faced with the daunting task of following in the footsteps of John Williams when composing for Superman? – however, he could have come up with a melody of some sort, the lack of which is most evident when watching the end credits. 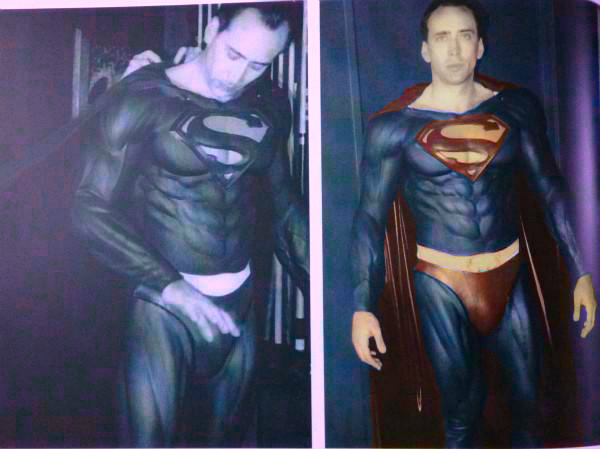 All of this, however, is the minor nitpicking of a documentary which is carried on a wave of sheer goodwill by a documentary film maker, cherishing the opportunity to prove all the naysayers wrong – with every new story concept, with every unearthed VHS tape, with every new shot of Cage in THAT suit, Jon Schnepp is daring the audience to concede: “…c’mon, are you seriously telling me you wouldn’t want to see this thing made?” By the end of the documentary, you really do have to agree with him – Superman Lives, for better or worse, would have been a film that you just wouldn’t have been able to ignore if it ever managed to leap that tall building in a single bound.