Trust me, I suspect this is something that is right up your street.

That paragon of nerd culture, nerd-princelet and documentary director Jon Schnepp, along with his producer (and fiancee) Holly Payne, are planning a follow-up to their hugely successful THE DEATH OF ‘SUPERMAN LIVES’: WHAT HAPPENED? film with a new feature-length project, exploring the success of comic book movies and television, the decline of its root source comics industry, and the explosion in the con culture that celebrates both.

SWEATIES UNITE: THE RISE OF THE UBER-NERD! may not be the most gainly title in the world (I dunno about you but I, for one, shower regularly, pal!) but it is the name that Schnepp and Payne have given to the project – and, like TDOSLWH (as the cool kids call it), the pair are taking to crowd-funding to get the thing made.

A Kickstarter has been launched today, with a whole host of rewards available, with an ambitious goal of over £125,000 ($175,000) so expect social media to be flooded with Schnepp’s face, on the cadge and driven to reach the goal by the fifty day time limit. If the end product is half the film TDOSLWH ended up being, it’ll be quite the film you’ll be proud to attach your name to – so donate today!

From the SWEATIES UNITE!: RISE OF THE UBER-NERD! Kickstarter page:

Jon Schnepp: “SWEATIES UNITE!: RISE OF THE UBER-NERD! is a feature length documentary that follows the global rise in popularity of Comic Book Based Films and Series, as well as the downsizing in Comic Book Publishing, in its shrinking sales year after year, as more and more comic book stores close each year. With Comic Conventions having now turned into basically Mass Culture Cons, most of the people attending these Conventions have never actually read any of the comics that the characters that they love seeing in the theaters or on the television screen are based on. What has created this rise and fall and total separation between these mediums, what can be done to help, and what is the future of both?

I will be traveling and interviewing comic book creators, writers, artists, and publishers from all of the major comic book companies. I’ll be speaking with the comic book convention patrons and vendors, I’ll be talking with the fans, the cosplayers, the sweaties, the comic book readers, old and new. I’ll be talking with the comic book store owners, what they are doing to keep their stores open, and how are they bringing in this new fanbase that is in many ways unaware of how to interact with them, or where to start if they wanted to. I’ll be interviewing the players in the media of film and television, the filmmakers, the producers, the showrunners, the game studios, the people who are making the next generation stories for fans both old and new. 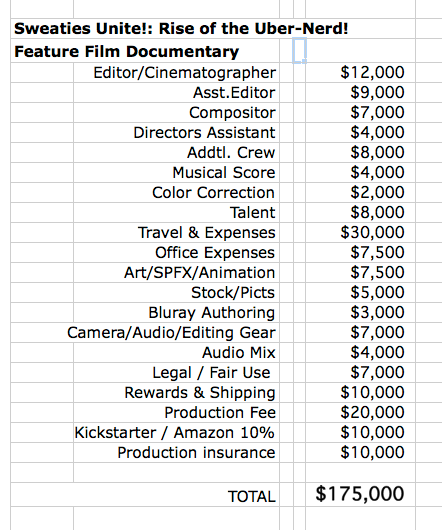 My budget reflects the travel and expenses that will go into making this documentary, as well as the post production flourishes that are needed to keep this at a professional level. Having already made a successful Kickstarter with THE DEATH OF ‘SUPERMAN LIVES’: WHAT HAPPENED?, and having it cost more than I thought and take longer than I estimated, I’ve done this budget accordingly. This is the bare minimum I’ll need to make this feature film properly, and once we’ve reached this goal, I’ll be adding stretch goals to boost the extras, add additional elements, and additional interviews with people from all around the world.

I’m most interested in finding out what we can do to not only merge these mediums, but to have them find their audience the best possible way. How we can salvage the death of paper, the loss of readers, the interest is there, how do we reconnect it? What is slowly being destroyed and slipping away can be channeled with the act of staying current and reacting to the new digital communications, the shorthands and the short attention spans, and focusing on a new way to bridge them. How do we curve this straight line and redirect people towards the imagination and creativity that is being forced to eat itself? Can this odd dichotomy that exists between Comic Book Movies and Comic Books be merged successfully?

Head to the SWEATIES UNITE: RISE OF THE UBER-NERD Kickstarter page and donate today!