As a new, shiny big budget version of Fantastic Four is unveiled to the world, Mark Searby takes a look back at a take on the iconic Marvel heroes that shaped the cinematic fortunes of the characters – all without ever seeing the light of day.

“A comic book franchise, known and loved worldwide, is transformed for the silver screen and goes on to wow the critics and audiences alike, alongside turning in a massive chuck of box office revenue. Prepare yourselves, comic book fans of 1994, here comes THE FANTASTIC FOUR!”

Sound familiar? Some of it might, perhaps, as two versions of the characters have ultimately made it to the big screen, a flashy new iteration from Chronicle‘s Josh Trank, hitting screens this summer, and back in 2005 with a critically-panned attempt, directed by Tim Story. However, over a full decade earlier, there was another attempt to bring Marvel’s First Family to cinema audiences: in 1994, the film The Fantastic Four was produced, cast, filmed and subsequently was never released – and, it was later discovered, never intended to be. But how did a film that cost over $4 million to make never see the light of day?

The German film company, Constantin Film AG, held the rights to The Fantastic Four copyright; however, unless they produced a movie based on the franchise by 31st December 1992, those rights would revert back to Marvel Films. As Constantin didn’t have the $40 million required to fund a big budget film for release, they turned to B-movie extraordinaire Roger Corman. Corman was informed in September about the urgent need for a film to start shooting within three months, so he slashed the budget down to $4 million and started shooting on 28th December 1992.

With a limited 21 day shooting schedule, Oley Sassone was called in to direct. The son of legendary hair stylist Vidal Sassone, Oley had previous worked with Corman on some low budget films and having directed for Concord Pictures as well he swore he would never go back to low budget film making again. But in an interview for Cinefantastique Magazine during 1994, Sassone said “I swore I would never go back, but this was Fantastic Four. They were going to be spending a bit more money than the usual Conchord productions, so I said I’d give it a shot.” By the end of the twenty one day shoot his attitude had changed dramatically “It was really hell. The week after shooting I felt like I had jet lag, like I’d been stepped on by Godzilla”.

The auditions were quickly done and fringe film actors were signed up for the major roles in The Fantastic Four, the pay reported to be $3,500 per week, with Corman selecting former Miss Nebraska Rebecca Stabb to play Susan Storm, a one time offensive American football full back Michael Bailey-Smith as The Thing and two bit-part actors in Jay Underwood and Alex Hyde-White to play The Human Torch and Mr. Fantastic respectively. 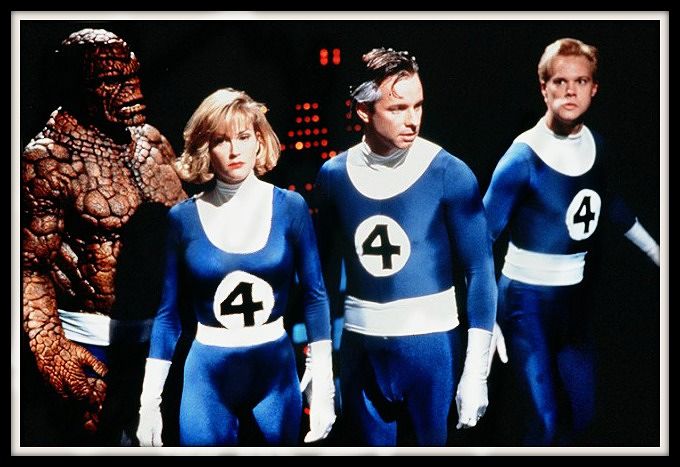 Optic Nerve were hired to do the make up and costumes for the film, utilizing the basic character designs from the original Marvel comics for all the main characters. The company then created a great Dr. Doom outfit that actually looked good and had respectable add-ons that suited the role perfectly. The main problem they faced was creating the suit for The Thing, producing two suits and two heads, the head for the action scenes was just a standard plastic mould, but when it came time for the talking scenes, Optic Nerve had created a mechanical head with radio controlled movements. Everett Burrell of Optic Nerve said at the time, “Ultimately, when it’s dubbed, you won’t be able to tell. Look at the Teenage Mutant Ninja Turtles.”

Herein lies the one of the major problems of making a low budget film with animatronics: watching clips of the surviving film, it looks like the mouth is just opening and closing rather than correctly moving along with the words. Not only that but the voice over doesn’t feel like it belongs to the character, it’s much less gruff and tough than should come from someone who is part human part craggy rock monster.

Post production on The Fantastic Four lasted several months. Corman and Sassone called in an optical effects supervisor in the shape of Scott Billups, who had previously worked on Jurassic Park. Billups used his home equipment to deliver the special effects required, but as 1993 technology was not at its greatest for this type of assignment, he enthused about using the Abacus Graphics Machine to manipulate just the scenes where special effects were required, with The Fantastic Four being the first film to be the first of its kind to use this level of technology.

Ultimately, it was all for naught: the resulting effects look absolutely terrible and are laughably cheap for a film that was made in the early 90’s. There is a scene towards the end of the film where the Human Torch is stopping a laser destroying New York. The special effects for the sequence are very reminiscent of the Jackson’s 1980 music video for “Can You Feel It?” and for a Marvel superhero film being made thirteen years later to use the same graphics made it look way behind the times. Also, many of the scenes involving Mr. Fantastic stretching are clearly extending animatronics’ poles, apart from the final shot where – spoilers! – his arm is waving out of a wedding limousine which is clearly just a pole with a glove on the end!

With the majority of the work undertaken by the Summer of 1993, Roger Corman and his production company started place trailers for The Fantastic Four in movie theatres and on their VHS releases. The cast were sent on promotional tours throughout the US to promote the film, including visits to conventions in Michigan, Illinois, Florida and a big panel at San Diego’s Comic-Con. The premiere in Minneapolis was first set for Labor Day 1993, then pushed back to January 19th, 1994. But shortly after this premiere date was set, rumours began to circulate about The Fantastic Four becoming the cinematic equivalent of an ‘ashcan copy’. Corman told LA Magazine, “Everybody liked the film. We had a contract to release it.” Eventually, Constantin Films‘ Bernd Eichinger did let slip that the film was never intended to be released, but he had just never told the cast and crew: they found out the films fate via word of mouth.

Today, fans of cult productions and superhero films ask the question: where is the film now? Initially, many – including Roger Corman – believed Eichinger still had the footage. However, that provided to be incorrect and was believed to be in the personal possession of Avi Arad, an executive at Marvel around the time of release (Arid has subsequently gone on to head up Marvel Studios and produce some of their biggest hits). The story goes that, in 2005, Arad hunted down the film after a stranger stopped him in the street to comment on his Fantastic Four t-shirt of the upcoming film and then asked him about the thread-bare Corman production. Concerned that the existence of such a film might tarnish the reputation of Marvel Studios, Arad reportedly bought and destroyed all the prints, rumoured to have never watched a single frame.

Of course, this has proven to be an old wives tale as the film is routinely available on bootleg DVD’s via eBay and other video sharing sites, as well as being viewable on YouTube, so a print must have survived for it to escape out into the wild. There were even reportedly copies of the 1994 version slipped inside of DVD bootlegs for the 2005 version, instead of the multi million dollar film everyone wanted to see.

For fans of kitsch, cult and incompleted film productions, it’s a shame that this version of The Fantastic Four will never see an official release, as it could easily find an audience in today’s booming superhero fandom (it already has a rabid fan base thanks to the bootleg version available) that would appreciate it for why it was made – a film never to be released to the world.

This article was first published – in its original, unedited form – in Issue 8 of New Empress Magazine and is reprinted with their kind permission.