Last weekend (20th-22nd April 2018), the Town & Country Resort and Convention Center in San Diego played host to the sixth year of a convention that has a simple remit: taking the comic convention of the city that has grown into the behemoth that it is back to its core roots, while celebrating the history and legacy of comics and pop culture in a smaller, more intimate surrounding. With San Diego Comic Fest having a number of the original SDCC creators at its inception, the show faces the challenge of retaining its ‘con-in-a-hotel-ballroom, trestle tables, spit and sawdust’ ethos while attracting world-class creatives and growing in popularity itself.

Thankfully, Event Chairman Matt Dunford, in his second year in the role, tackles that challenge head-on by curating a show that doesn’t play a catch-all game with its content, carefully choosing some unique, legacy subjects which fascinate, entertain and inspire in equal measure. 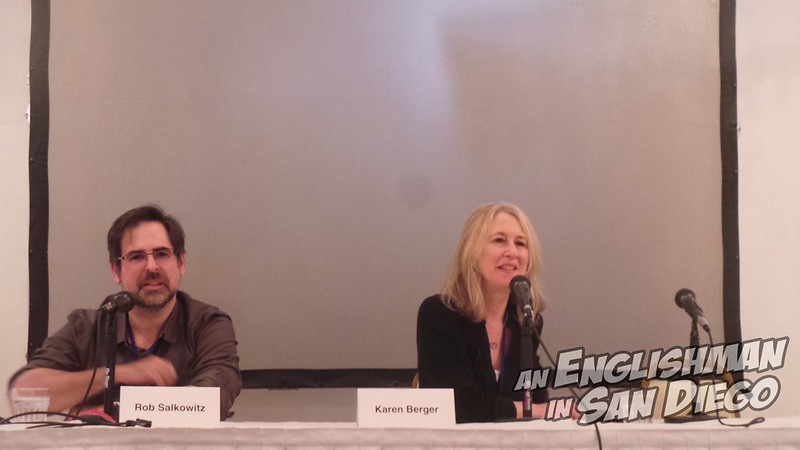 One such subject is legendary comics editor Karen Berger, whose contribution to the world of comics cannot be overstated. As a pivotal part of the team that brought writers and artists such as ALAN MOORE, DAVE GIBBONS, GRANT MORRISON and NEIL GAIMAN to American readers (as part of the so-called ‘British Invasion’), Karen shaped the language and tone of comics for a generation.

Karen is promising to do so again in 2018 with the creation of new imprint Berger Books, the first releases of which are due to hit shelves this summer. Our ‘AEISD Man On The Ground’, Dan Berry, was on hand to record a Spotlight Panel, moderated by Rob Salkowitz, in which Karen talks about highlights of her incredible career…

Thanks to Matt and his team, allowing us permission to record and present this panel.