Wheee! And the Special Guest announcements come to a close with One Last Special Guest – and Comic-Con International have only gone and saved a living legend for last, joining a phenomenal line-up of comic creatives and multimedia talent in San Diego this July (Thursday 20th – Sunday 23rd July; Preview Night Wednesday 19th). Ladies and gentlemen, please welcome to the ring, wearing the red shorts, punching hard and talking loud direct from the mighty city of New York… STA-AAAAAAAAN LE-EEEEEEEEE!

Let’s keep the format to these posts nicely consistent – so, in case you don’t know who he is, here’s who we’re adding to the pile:

As always, we’ve added Stan to the listings on our dedicated Utility Belt pages –  do bookmark them to keep track of who you can see in person at this years convention, fingers crossed: 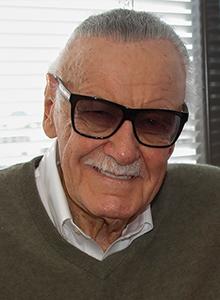 Stan “the Man” Lee’s influence over comic books is incalculable. His co-creations Spider-Man (with Steve Ditko), X-Men, and The Avengers (with Jack Kirby) have been monster movie hits, helping make Marvel Comics the leader of the comic book industry. Some of Stan’s other great co-creations, such as Thor and the Black Panther (both with Kirby) have movies on the way in the next few years.

In 2008, President Bush presented Stan a Medal of the Arts, lauding his amazing career. Stan is currently developing movie and TV projects with his company POW! Entertainment, while still proudly cherishing the title of Chairman Emeritus of Marvel.