Three representatives of An Englishman In San Diego were in attendance at this past Bank Holiday Weekend’s Summer Edition of the hugely popular MCM London Comic Con – EIC Leonard Sultana was there, not only in Press capacity but also hosting a couple of panels in the specialist stages in the North Hall, and his review of the show (along with a number of individual interviews) will be posted shortly. Also showing their faces were AEISD Correspondent Mark Searby and our resident photo snapper, Sam Payne – here, Mark gives his impression of what has been positively received as ‘MCM that we know and love, with a serious shot of adrenaline’…

Mark Searby: It is amazing what a bit of spit and polish – and being bought out by one of the biggest US pop culture convention organisers in the US – can do. MCM London Comic Con hit the ExCel Exhibition Centre in Docklands again this past weekend; however, there was something slightly different about it all. It still had a lot of the previous vendors and stages from prior years yet now it had a sparkle to it –  updated, glossier, sparklier, newer-er… 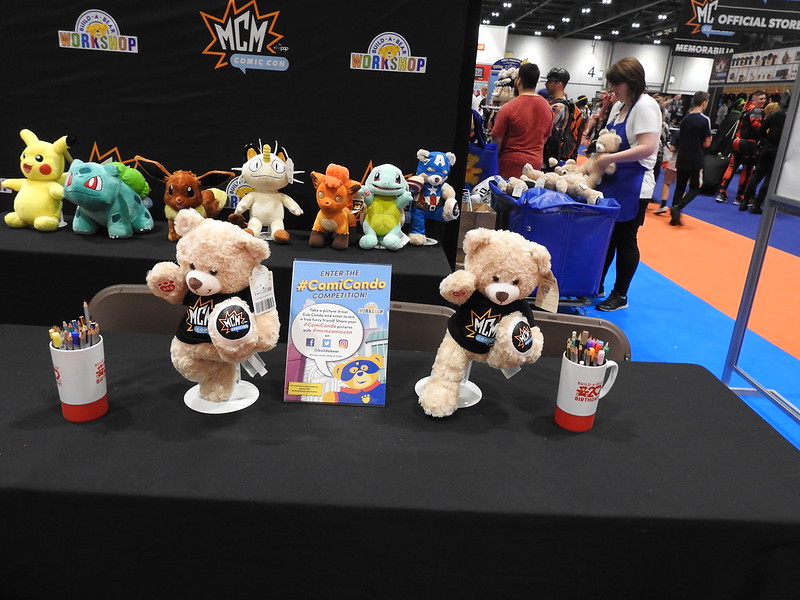 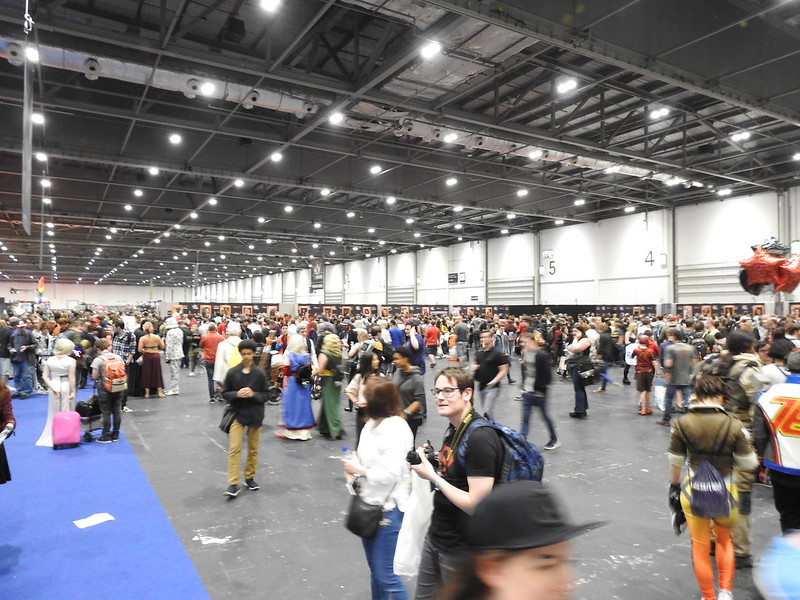 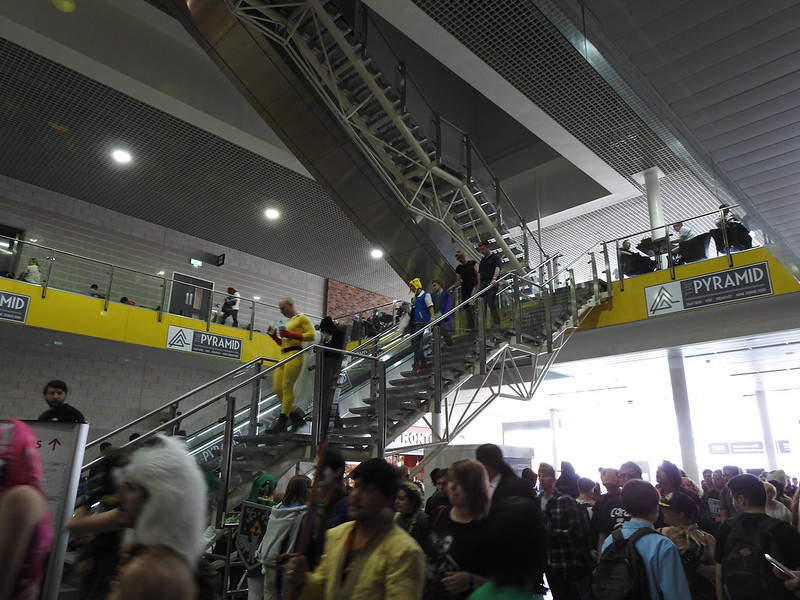 As soon as you stepped through those very large shutter doors to the Halls (all opening in synchronisation), there was a sense of the show being grandiose and bombastic, but not in a negative way – this felt like the culmination of a lot of effort for MCM London Comic Con to evolve overall into a pop culture convention that had not just one or two things but several things that any nerd would enjoy being part of. It now had the swagger of a large US convention yet fused with the original UK attitude. Basically, it looked and sounded like the complete package – something we haven’t really experienced in the UK in the past, however hard some have tried. 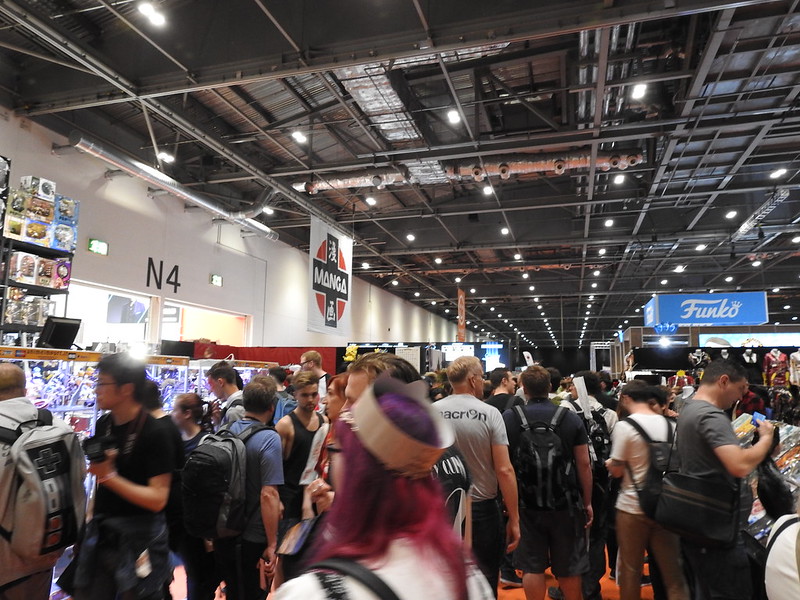 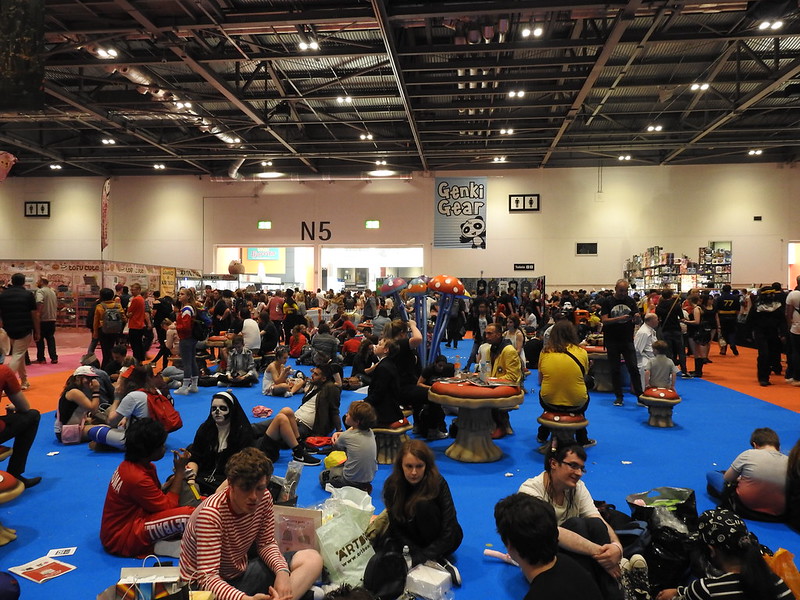 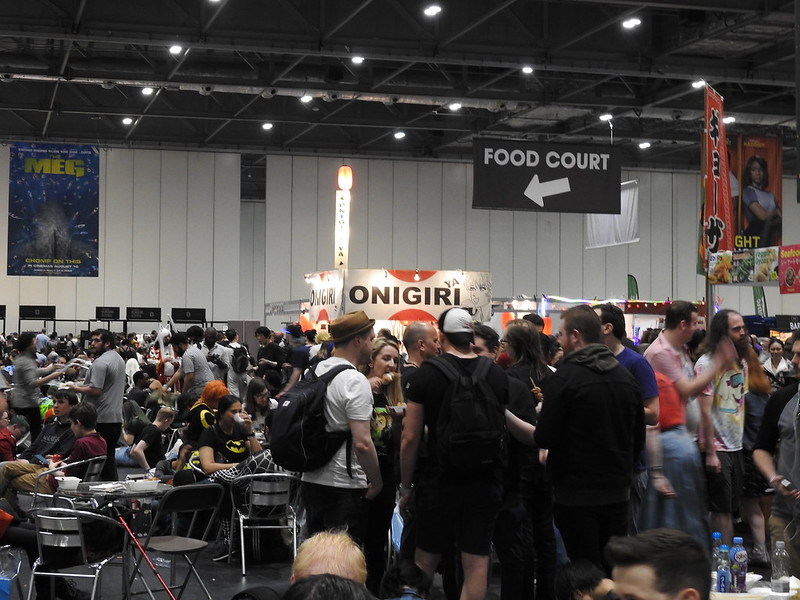 Invited Special Guests ranged from BATMAN: THE ANIMATED SERIES voice talent Kevin Conroy to home-grown chap LUCIFER‘s own TOM ELLIS from big screen Marvel draw LETITIA WRIGHT (BLACK PANTHER) to, erm, small screen Marvel draw Rosario Dawson, and many more in-between. And yet, it felt like the show wasn’t over populated with Special Guests simply there to sign stuff and pose for photos; many of these guests had dedicated panels not just on the huge Main Stage (the largest presentation space in the venue, some two and half thousand capacity), but also on the large Centre Stage, the specialist Comic and Creator Stages and the ever-popular Live Stage, bang in the middle of the South Exhibition Hall.

The Live Stage, hosted by some very perky and bubbly personalities (ahh, you can spot mobile/radio DJ’s and hungry podcast hosts a mile away!) was always packed, always having a range of names dropping by throughout the entire weekend. These guests were here to talk to everyone who wanted to listen and, judging by the swarm that gathered to see Ms. Wright, it was a Wakandan population of people who wanted in to that panel, and several more. Also very popular was the Memorabilia Area, featuring more familiar UK convention guests such as RED DWARF‘s CHRIS BARRIE, THE ROCKY HORROR PICTURE SHOW‘s PATRICIA QUINN, and Doctor’s SYLVESTER MCCOY and PETER DAVISON, amongst others. Oh hi, ANDREW LEE POTTS! Fancy meeting you here! 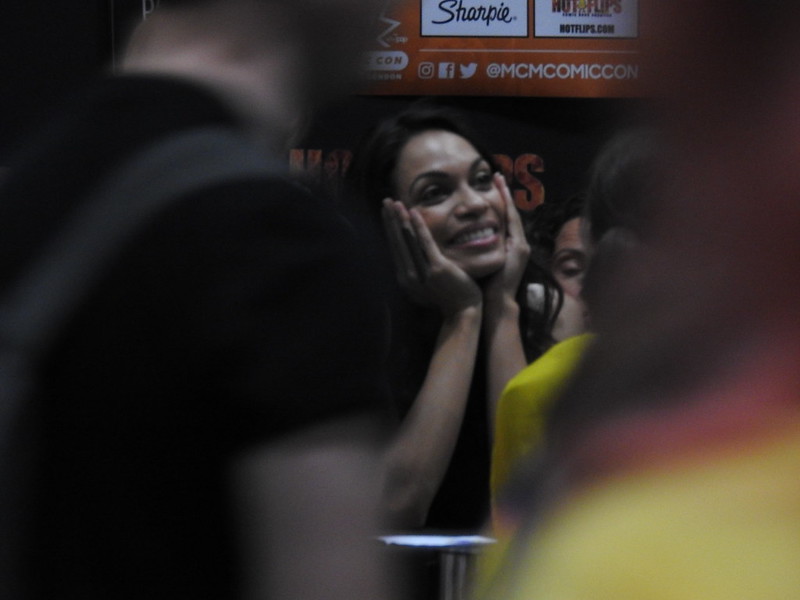 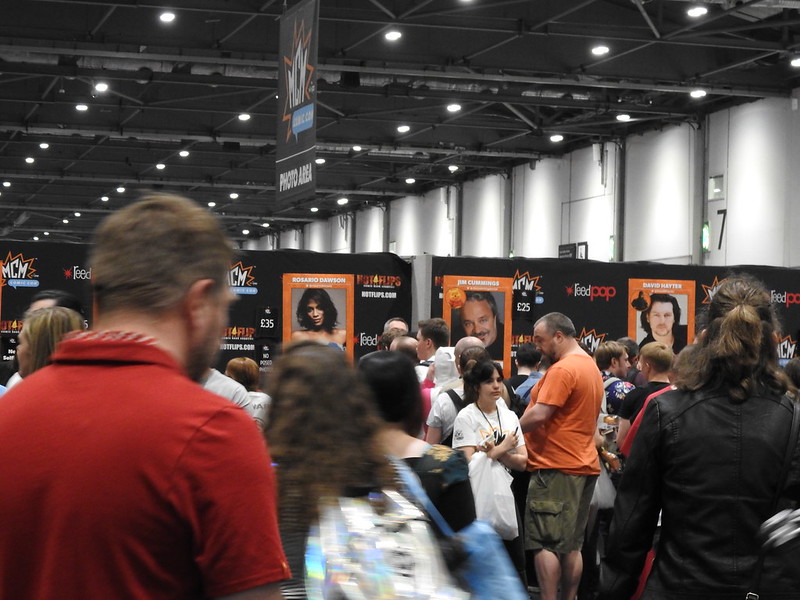 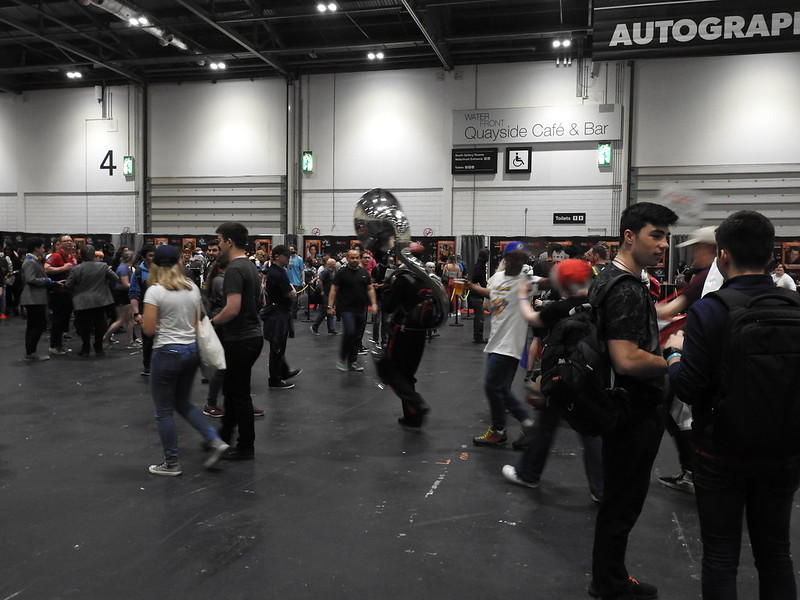 Like I say, the Live Stage nestled smack in the middle of the Exhibition Hall, which meant you could go from that to the many number of vendors, spread across both sides of the ExCel. These seemed to have nearly doubled and were better curated and much better laid out than seen in previous years. The bigger vendors such as Universal Studios, Funko Europe and Nintendo occuping large sections of the floor, yet there was still plenty of space to drop into those areas without it ever feeling like a tight squeeze. 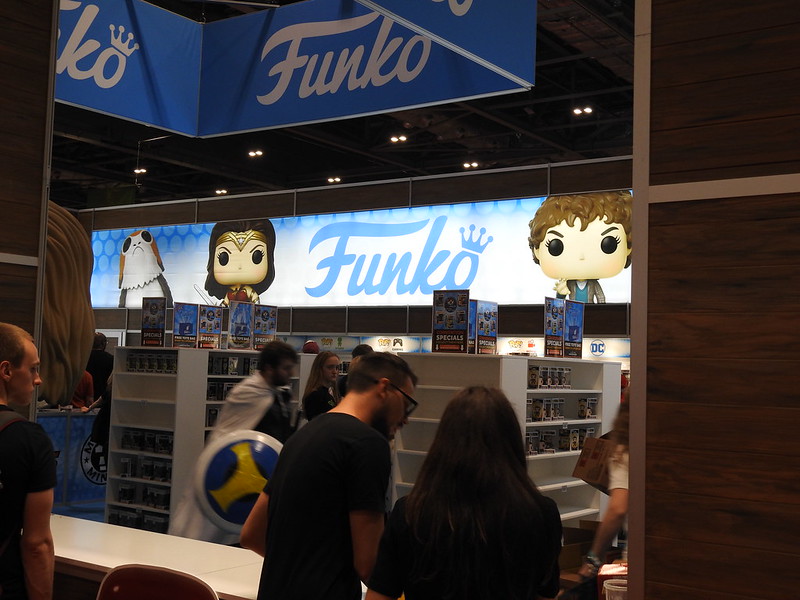 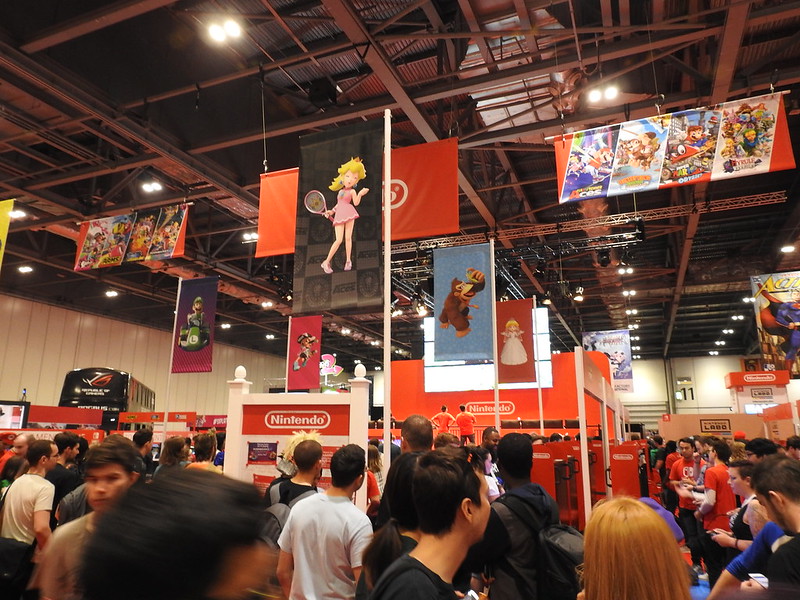 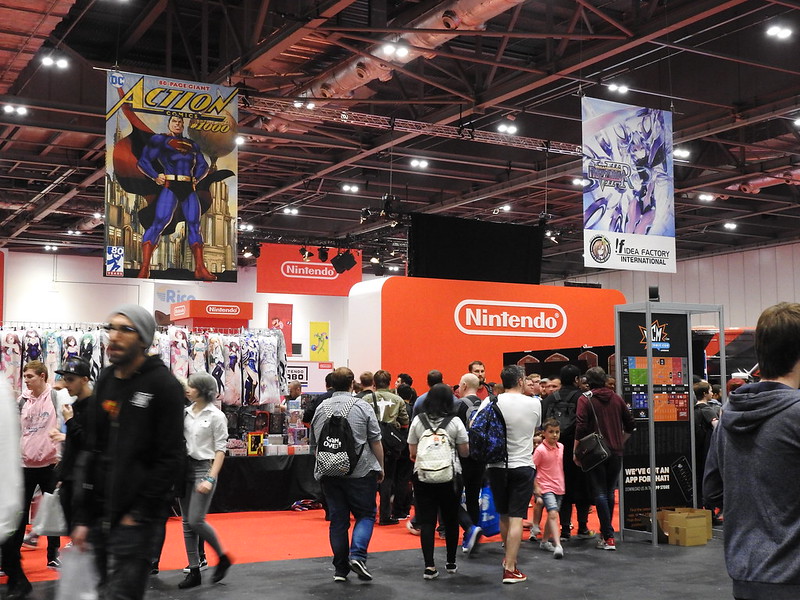 (While Comic Village is not my area of interest, I will say that, walking through it, it was plainly obvious that it had grown considerably in size and was incredibly busy throughout the entire weekend. I’ll leave it to Leonard for his impression of this area of the show…) 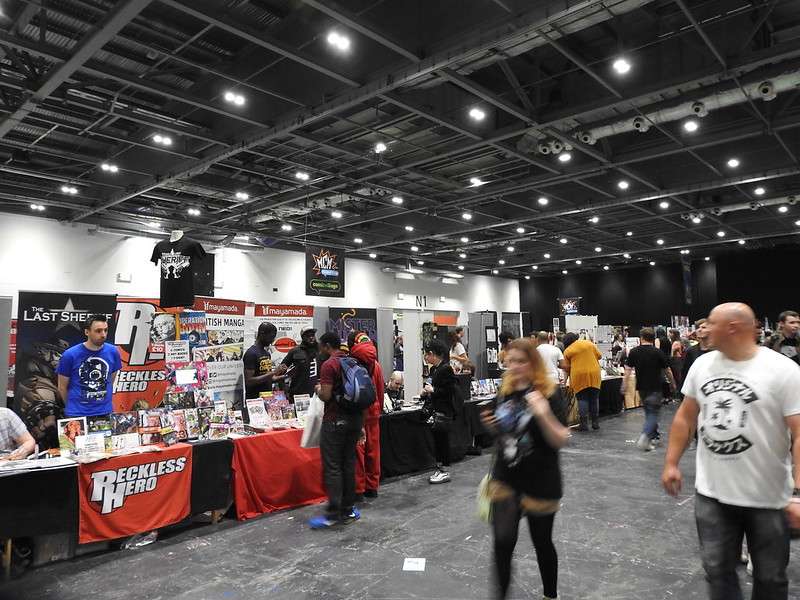 Still one of my personal favourite areas of MCM London Comic Con is the Asian section with its array of vendors selling themed merchandise, anime costuming material and incredible food and treats, even down to original sweets and chocolate – the smells emanating from the stalls were enough to draw me in anyway! There were even vendors selling classic Japanese lanterns and ornate crockery… I was pleased to see that section of the show was still there and still represented as big as previous events. To me, that representation is as important as the Special Guest areas. 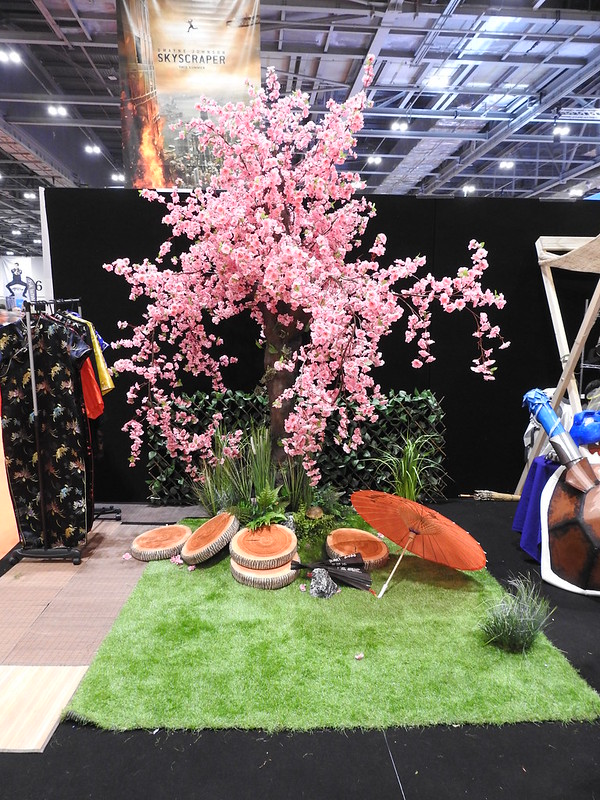 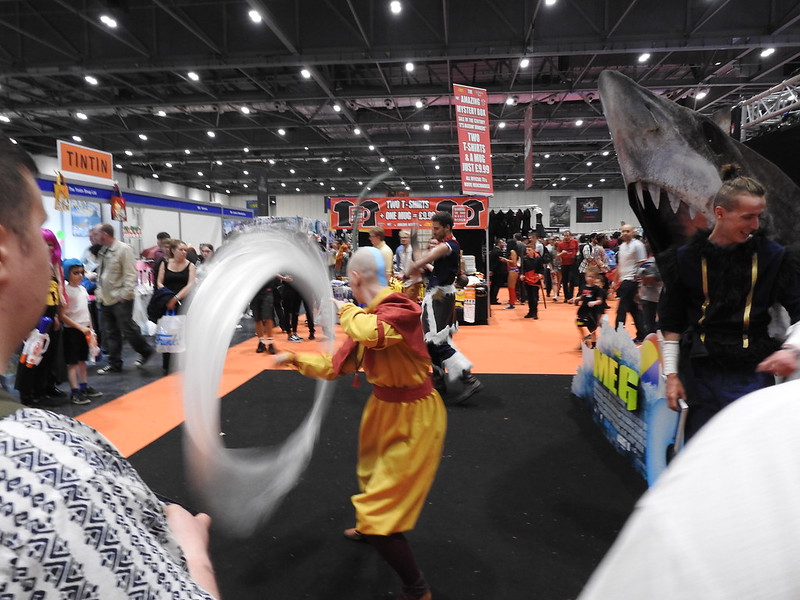 Now, to the new stuff. One element of the convention that is now starting to develop nicely were studios bringing interactive stands, either incorporating VR or through large ‘activations’, as they are known in the US: Universal Studios brought three different JURASSIC WORLD: FALLEN KINGDOM interactive stands, including a VR stand and also a huge photo set-up with a broken JW pod, set up next to a menacing Velociraptor. If dinos weren’t your bag, there was also the option to have a photo taken on a backdrop of the forthcoming Dwayne Johnson-actioner, SKYSCRAPER. And, if that wasn’t enough you could be eaten by THE MEG in a green screen affair, in which you could act serene in a inflatable dinghy with said Megalodon attacking from below (no JASON STATHAM on hand to save you, unfortunately!).

In previous years, these types of stands had been small fry affairs, if they even showed up at all, with only one or two throughout the whole convention. But now, in 2018, the trend to engage with the convention audience has burst into life – and why not?! It is an ever-present (and often, rather fun) element of US conventions that they had embraced and that we in the UK were missing out on. Hopefully, these interactive stands continue to expand in the future. 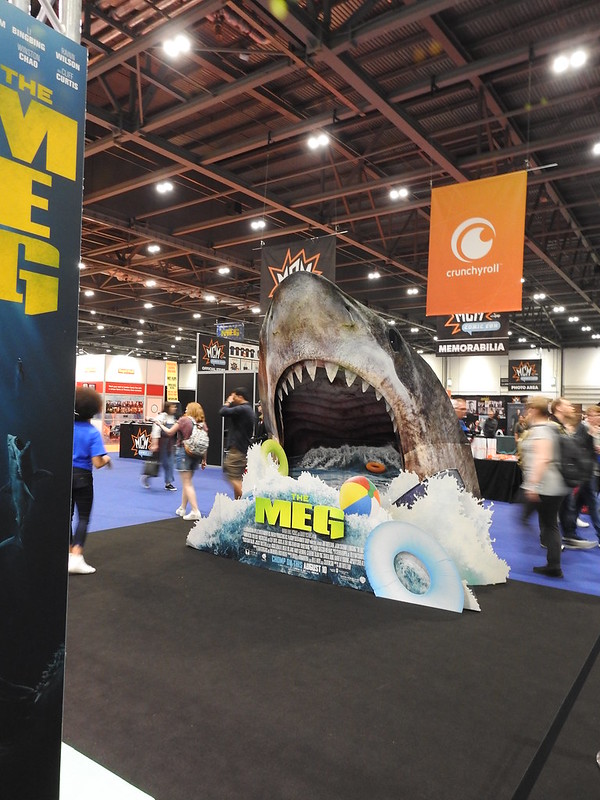 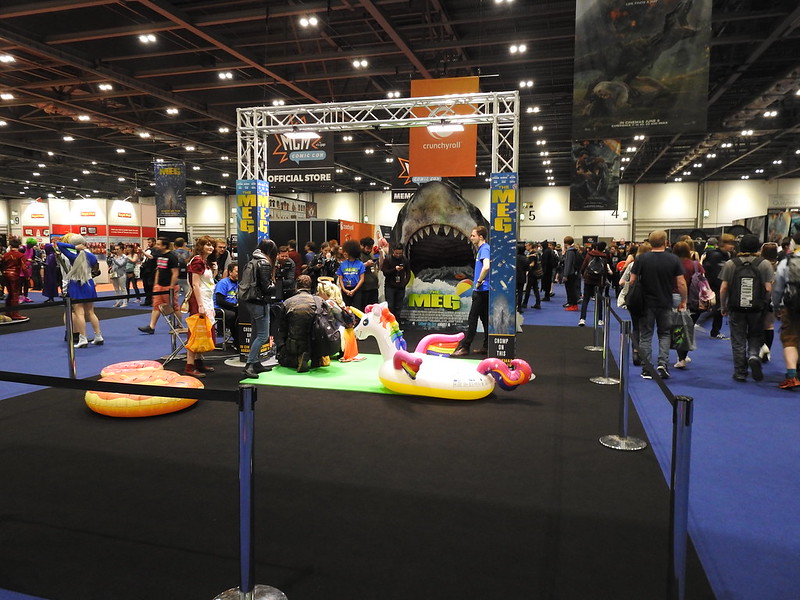 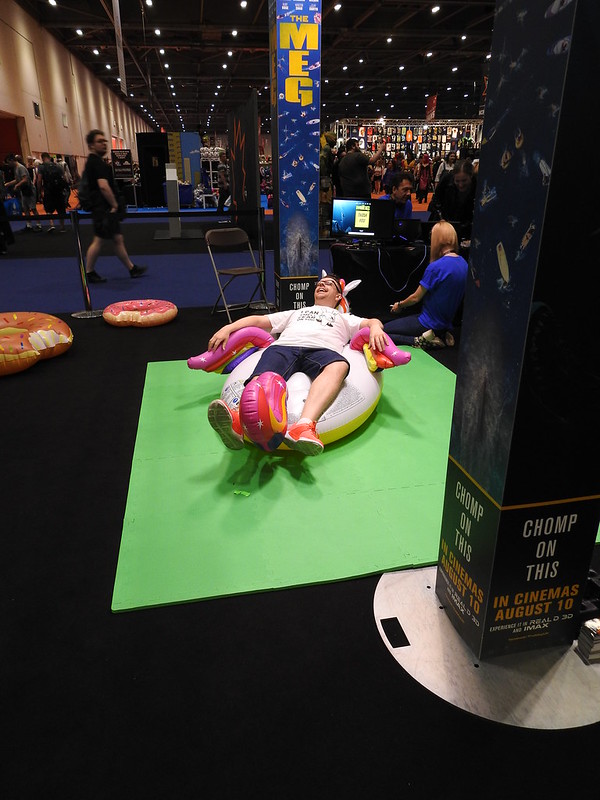 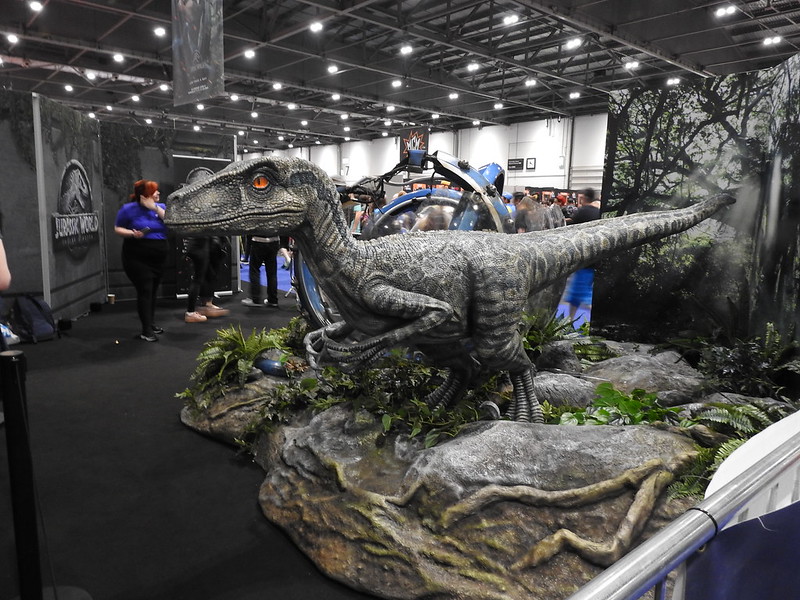 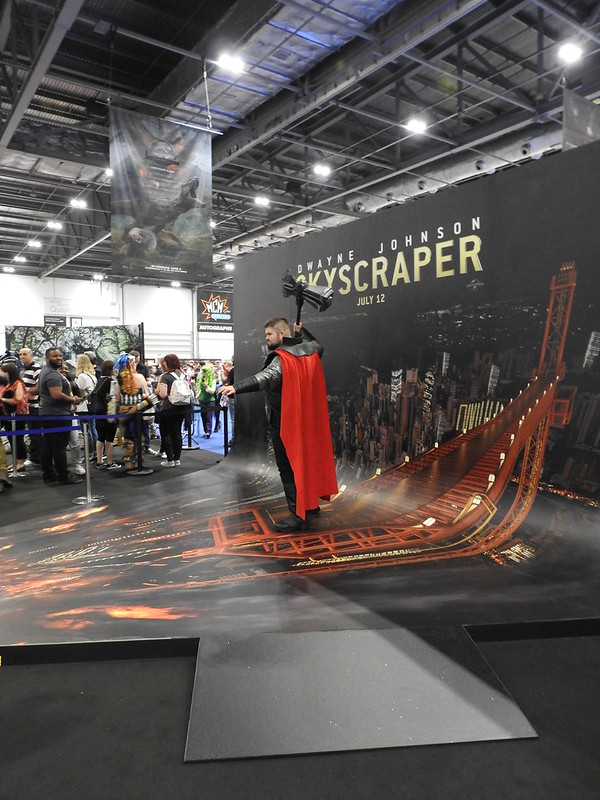 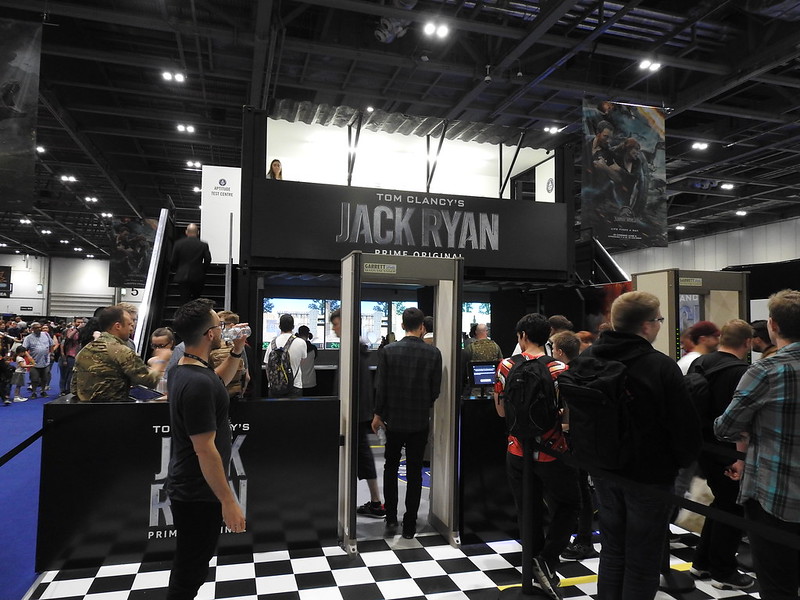 One element that has always had a strong showing at MCM was cosplayers at the show… but now, it seems like this event is now THE place for cosplayers in the UK. Not only was there many pros, representing on the floor itself – including international star Ivy Doomkitty – but there were thousands of them attending as punters, with it seemed like every other attendee representing their favourite fandom, either simply milling about having their photos taken inside but also taking prt planned large photoshoots, inside and out. Even in the rare Bank Holiday heatwave, there were people still in their outfits wandering the grass area having photos taken in the blazing sunshine. It almost felt like if you weren’t in cosplay, then you were in the minority at this event! 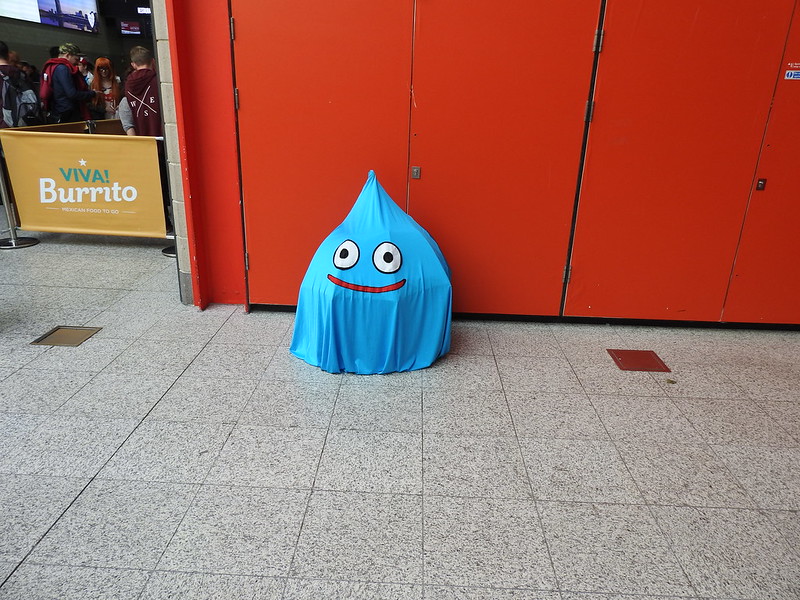 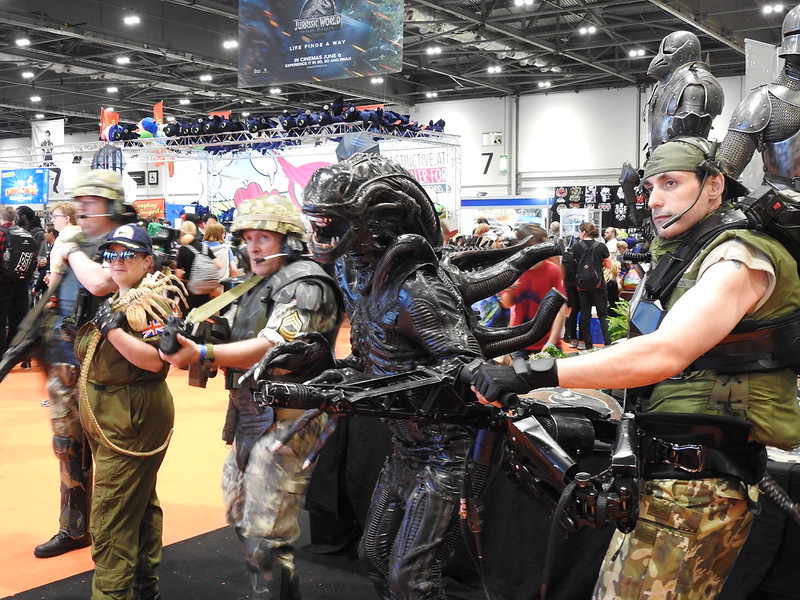 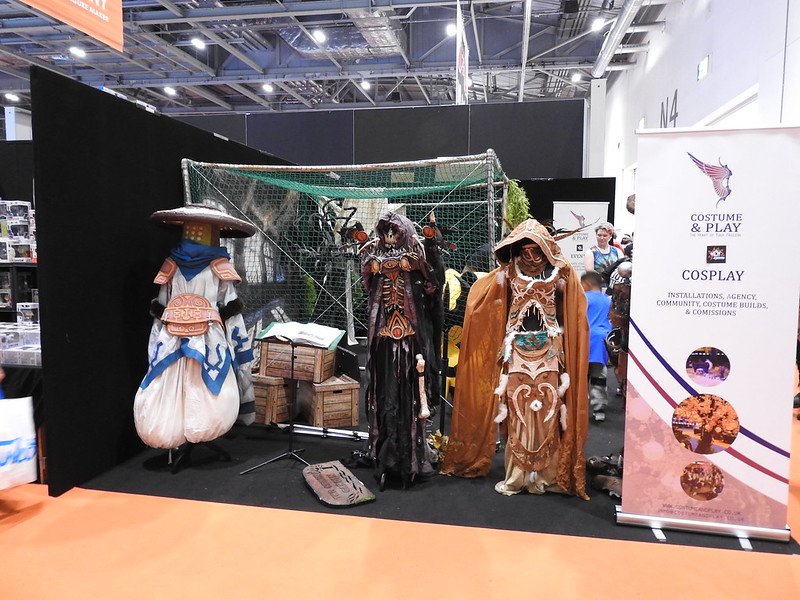 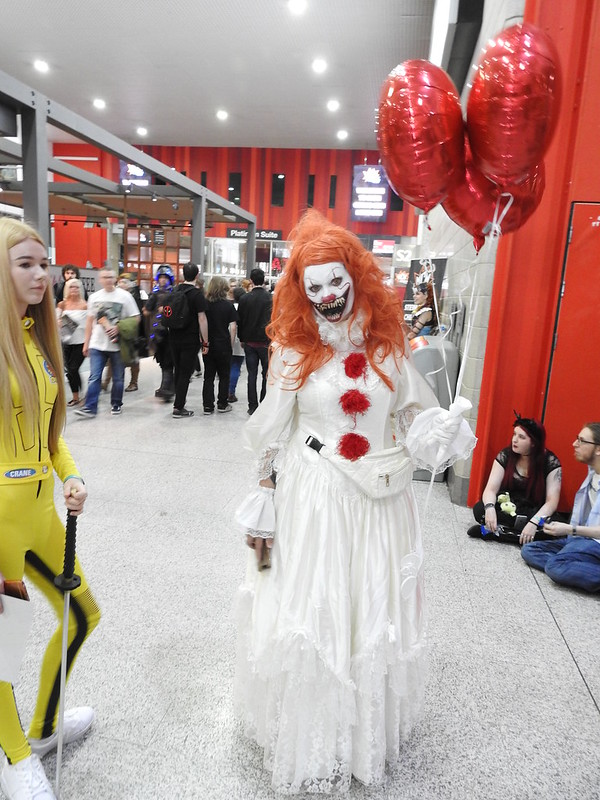 In conclusion, this MCM London Comic Con event has seen the show become bigger and better for all the right reasons. It has expanded in places it that needed it and reduced some of the more wasteful elements of previous events. No longer is MCM an event you can spend just one day at and have seen and done 99% of what was on offer; I was there two days and, even then, it felt like I hadn’t truly seen and explored everything I wanted to. Put a marker in the sand, people: the UK Pop Culture Convention game has changed after this show – and, from all accounts, they’re just getting started. Good. For myself, I hope it continues to grow and thrive… 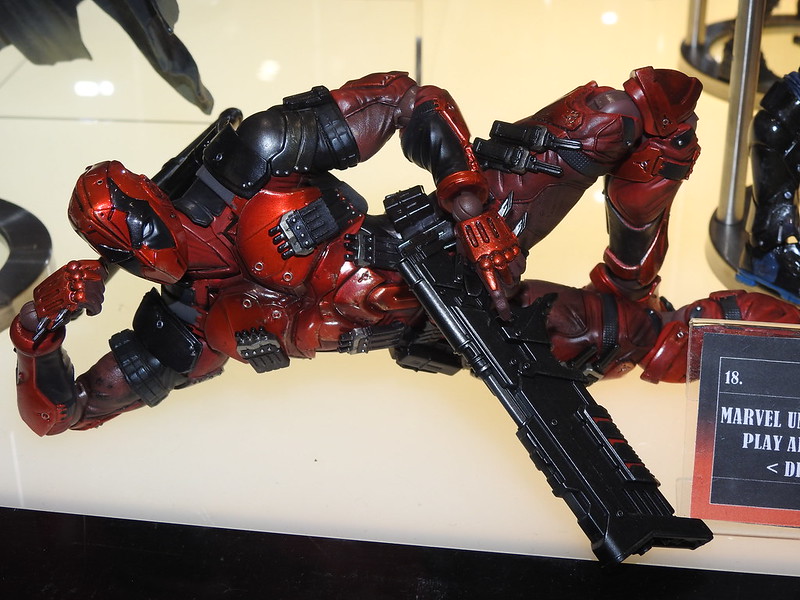