This past weekend, Joel Meadows and Andrew Colman of Tripwire Magazine coordinated the launch of a brand new comics-led convention on the UK’s South Coast – Portsmouth Comic Con. Taking place on Sat 5th and Sun 6th May at the historic Portsmouth Guildhall, thousands of eager comics and pop culture fans braved the sizzling Bank Holiday heat to meet-and-greet with some of the biggest names in comics.

AEISD follower (and member of the SDCC UK Attendees Facebook Group) Andrew English was in attendance, taking shots of the day – and he did us a cracking job, capturing all of the action from the Exhibition Floor, along with some ace cosplay on display. He also wrote us up a report, too…

Andrew English: First up, for full disclosure, sadly I could only attend Saturday of the event. This was Portsmouth’s first convention, set in Portsmouth Guildhall, a stone’s throw from mainline station. First thing you saw on approach was the outside front, fenced off with a presentation stage – there was quite a lot of people queuing up down the left hand side of the Guildhall, and onwards an hour before doors even opened. As you made your way through the Ground Floor Entrance, you could collect your advance tickets orders and programs; a couple of dealers were also squeezed in here, showing off that every square inch was being utilised. 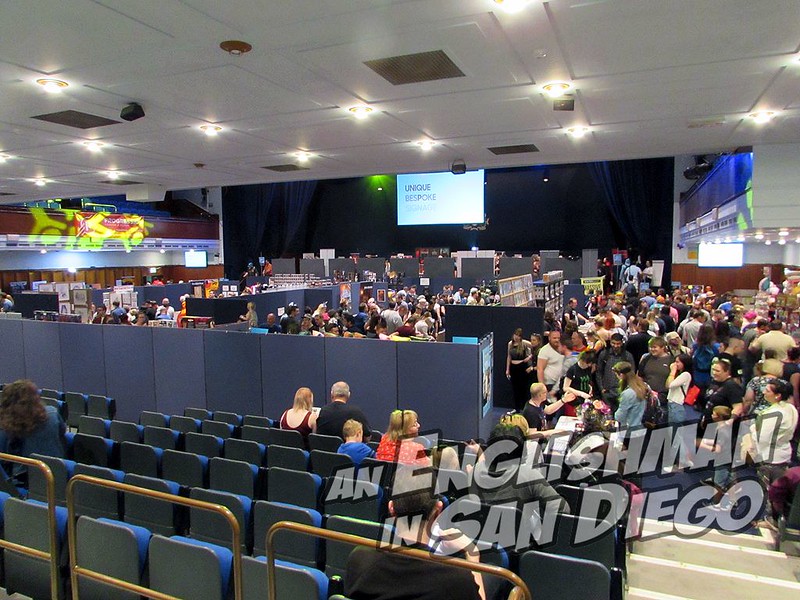 And utilised, it was. The layout of the event was sprawling, with the entire venue filled to the brim with content – the Main Concert Hall was separated down into three areas – a cordoned off Artists Alley where the stage would normally be located (busy from the outset as fans queued to meet guests such as Walt Simonson), a Exhibitors/Dealers area where the concert seating would usually be, corridored into comfortably wide channels with wall dividers; and then the raised seating area to take a breather, looking down on the content below – all in all, a very efficient way of using the entire space. 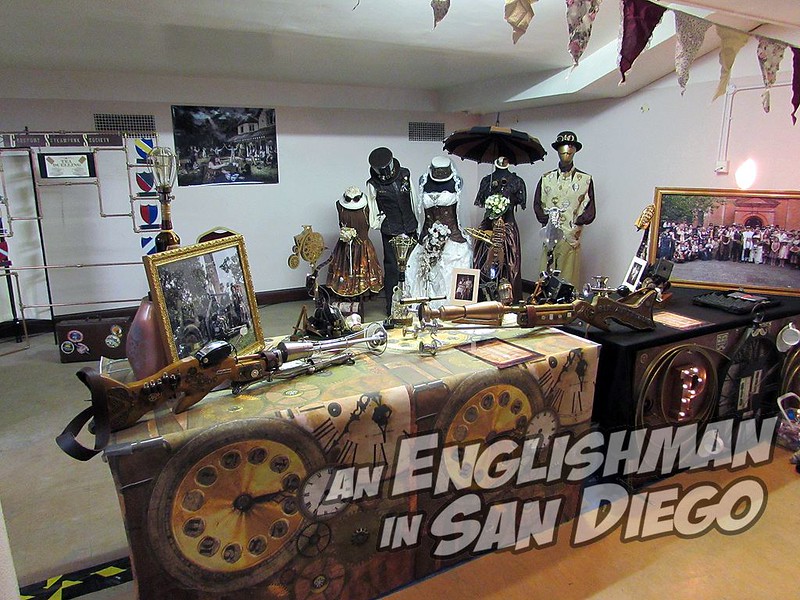 The Basement was home to “Steampunk Deck”, a curated space where you could experience all elements of steampunk, from costumes and props, to original art – you could even give the scene a spin by having your picture taken in steampunk gear. Also downstairs featured a wall dedicated to what I think was a local school competition, themed around “creating your own hero”. Pretty damn cool.

Everywhere you turned, there was something to see: one of the corridors, alongside the Main Hall, featured blown-up poster covers of Superman comics from the 80’s; at the end of this corridor was a professional photo-shoot setup, where you could get shots taken with the Special Celebrity Guests (for only £15 each, a cracking price as bigger cons would charge you two or three times as much); yet another corridor had a Stan Lee/Alex Ross Print Exhibition (which they was also selling, if you could spare a spare grand, and the rest). Side rooms had dealers, artists and Guests from TV/Film autographing, there were panel content in a number of ornate chamber rooms… it was packed. 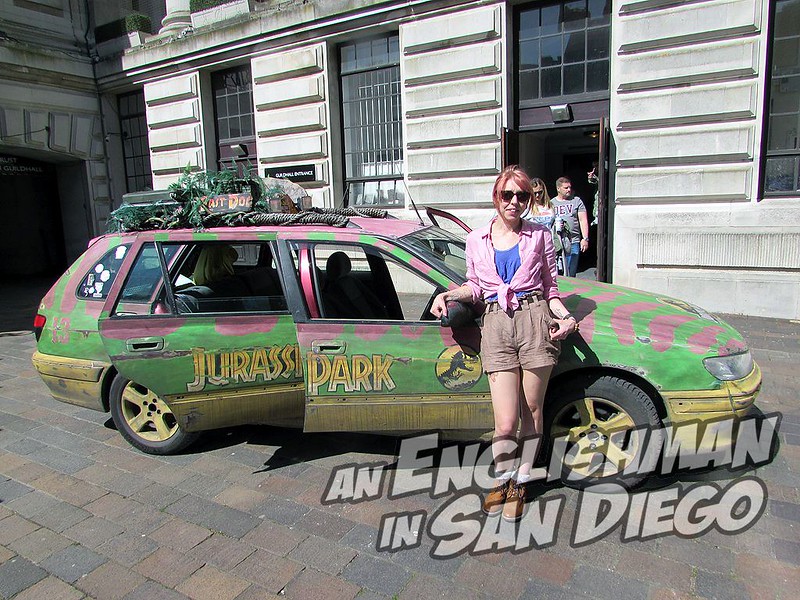 And it kept going, too, with even more to discover on the First Floor of the Guildhall, featuring five areas:

Second and third floor hosted three panel rooms – I didn’t attend, but they was all half to fully packed (including the one I actually wanted to attend, a discussion by university graduates on the phase 4 and the future of Marvel Films. with a queue out of the door! Typical!) 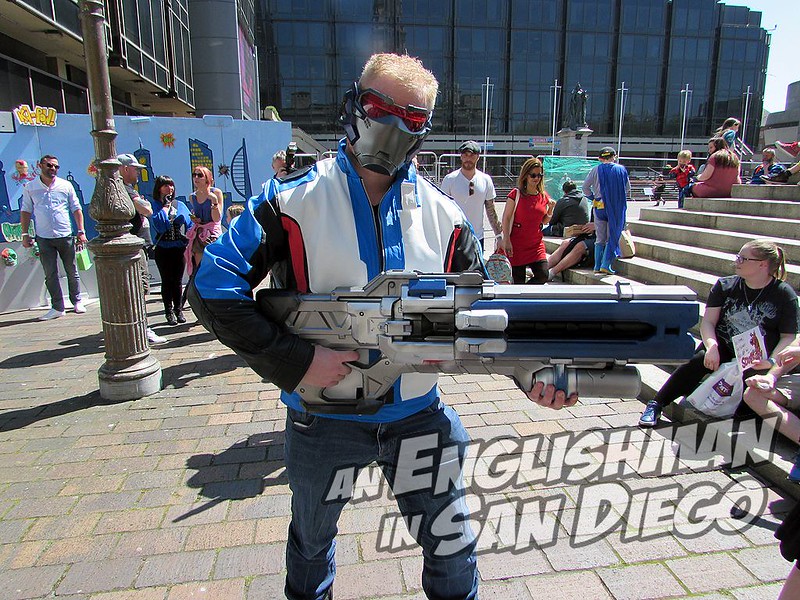 To escape the crowds inside, the first thought is to take a breather in the rare blistering heat of the Bank Holiday fresh air, outside – it was busy out there, too, mind. The stage out front hosted Jedi training, live presentations, and a Children and Adult cosplay competition (run done differently from other competitions that I’ve seen, as there was not a 1st, 2nd and 3rd Prize, but just three unranked winners from each Child and Adult category). In the corner, just before the food court, was an open-air table top games vendor and a try out area for the games. Rounding things of, down the right hand side, was a food court staffed by convention employees, which you could consume at the bistro tables or in the marquee. (The food, that is, not the staff… What do you think I am, some kind of zombie?? Although there was a couple of those, shuffling around, too!)

My feeling was that Portsmouth Comic Con was very good, considering it was their first run at this. It was much larger than I was expecting, and had quite a variety of people to see, and things to do. I felt that the only downside was that the Basement and Upper Floors only got occasional footfall, possibly due to a lack of awareness of the content on display, even though each end was well signed with what was on floor above and below. Still, this was a strong opening and if Portsmouth Comic Con returns again next year, I’d heartily recommend attending.