Ahh, the Lakes International Comic Art Festival – lovely. A cracking artist-focused convention which takes over the entire picturesque town of Kendal in Cumbria, and is, quite frankly, one of the highlights of our convention year. Lovely.

Yes, we may keep saying ‘lovely’ when it comes to LICAF, as it is a particularly laid back affair, as conventions go. Sure, the organisers may be paddling like ducks under the surface but, up above, the event usually glides along with a tranquil grace. Which is impressive, considering the amount of stuff that goes on over the course of the weekend (Friday 13th – Sunday 15th October 2017, various locations’ throughout Kendal)

The organisers have today announced the attractions that are running over the course of this years Festival, attractions of simply the highest calibre – previous years have seen appearances from Dave McKean, Bryan Lee O’Malley, Duncan Fegredo, Leah Moore, Steve & Luke McGarry and loads of other immense talent.

Highlights of the weekend include events such as the Ultimate Comics Master Class with top MAD Magazine artist Tom Richmond; an in-depth interview event with SPIDER-GWEN artist Jason LaTour; the launch of new work by creators such as Mal Earl and Kermit Leveridge; the chance to meet the “insanely imaginative” 2000AD writer Peter Milligan; discover how comics can shine an uncomfortable light on our modern world with Hannah Berry, Darryl Cunningham and Fumio Obata; find out more about the art of top illustrator Michael Cho (who provided this year’s gorgeous Festival artwork); meet USAGI YOJIMBO creator Stan Sakai; and experience Finnish comics – and the Moomins! – as you have never experienced them before.

The Festival’s opening Gala Opening Night this year will be QUICK ON THE DRAW – a spectacular evening of live draw featuring some of the fastest, funniest and most talented cartoonists on the planet. The legendary Sergio Aragonés (who has only made occasional visits to the UK in the past) will demonstrate his quick-fire genius together with superstars from the United States’ cartooning scene.

Lakes is organised slightly differently this year – instead of paying for individual panel presentations and talks at the Brewery Arts Centre on the Saturday and Sunday, attendees now buy a Pass for each day they want to attend, or indeed the full weekend – no word yet on room clearing or whether it’s first-come first-served, but we’ll reach out to LICAF and find out.

The Passes are priced at:

All booking are subject to a £1.50 booking fee, and are available to buy on the links above. You get a bunch of guest related goodies as well and a snazzy wristband with your Pass Purchase. Groovy.

Don’t worry, though: the Clock Tower is still free, as are the Canadian Comics Lodge, Finnish Village and Family Zones. The organisers are also expanding their content spaces this year, with interviews and panels taking place in rooms at the Clock Tower and more – let’s take a gander at what makes up this years magnificent ‘three ring circus’:

“Our Gala Opening Night this year will be ‘Quick on the Draw’ – a spectacular evening of live drawing featuring some of the fastest, funniest and most talented cartoonists on the planet.”

“An opportunity for families to immerse themselves in the wonderful world of the Moomins!”

“Designed for a 7-12 age range this is your chance to cartoon alongside the very best in the world!”

“Find out all about Canadian comic art and meet creators at the Canadian Comics Lodge.”

“How better to celebrate the centenary year of Finnish independence than in Kendal’s impromptu Finnish Village focussing on the work and legacy of internationally-famous artist and writer Tove Jansson?”

“This event will celebrate one of the world’s longest running and most influential comics through the words of one of its most popular and successful editors, Steve MacManus.”

“Metaphrog is a remarkable duo based in Scotland who have won many awards and accolades for their unique work and for their constant promotion of comics as a medium.”

“If you think Peter Rabbit means business, then think again!!”

“Michael Palin has declared that “Tony Husband is consistently one of the funniest cartoonists around.”

“LICAF is not known for being loud but on this occasion we’re going to let our proverbial hair down and shout… a lot!”

“Chip Zdarsky is (according to his own biography) an award-winning nice man and the co-creator and illustrator of the hugely popular, and sometimes banned, SEX CRIMINALS.”

“An unmissable chance to discover more about the kaleidoscopic world of Melinda Gebbie!”

“LICAF is proud to present an hour of animated comic art entertainment with, the one and only, Steve McGarry and his twin sons, Joe and Luke McGarry.”

“We think Jason Latour is one of the most talented and original comic artists of his generation which is why we are are so excited to welcome him to Kendal this year.”

“Recognised as one of the most influential British comic artists ever, Bryan will be launching the first and last volume of his epic GRANDVILLE series at the festival this year.”

“Mariko Tamaki is a Canadian writer, activist and performer with “an avid interest in freaks, weirdos and other fabulous forms of human behaviour.”

“Your chance to meet THE WALKING DEAD artist Charlie Adlard (and enjoy a hand-crafted beer!)”

“This year LICAF is celebrating the life and work of novelist, painter, illustrator and comic strip author Tove Jansson.”

“LIES AND OTHER FOOLS is a powerful graphic poem exploring the near-death experience brought about by septicaemia.”

“Pencils and wit sharpened… you don’t want to miss this LICAF Live Draw extravaganza, as MAD and Viz go head-to-head for the first time!”

“Peter Milligan was at the forefront of the revolution in comics created for a more sophisticated, adult audience.”

“Michael Cho is a cartoonist and illustrator based in Toronto, Canada… Find out more about him and his work in this fascinating panel.”

“Hosted by John Freeman, this is a excellent opportunity to meet the creative tour de force that is Ivan Petrus – you can see him work too!”

“Join Miguel Domínguez as he discusses all things manga with Paul Gravett… and he’s launching his new book MANGASIA too!”

“Director of the Amiens Comic Art Festival, Pascal Meriaux, presents a festival screening of Luc Besson’s Sci-fi adventure, based on the incredibly popular and influential work created by Jean-Claude Mézières and Pierre Christin.”

“This year Ruskins transforms itself into the Nu Earth Bar celebrating the 40th Anniversary of 2000AD and serving ‘Rogue Trooper’ beer with artwork by Dave Gibbons.”

“Expect the unexpected (apologies for the cliché but…), as Robin and Lorenzo Etherington return to the stage due to popular demand (oops, there’s another one!).”

“Alex Fitch is joined by Hannah Berry, Darryl Cunningham and Fumio Obata to discuss the power of comic art to expose the truth.”

“Allow Tim Pilcher to guide you through the life of extraordinary creator and psychedelic pioneer Brendan McCarthy.”

“Kick-off Sunday in comic art style and celebrate the history of football in cartoons and comics with Steve McGarry.”

“Preen/don those moustaches (male, female, adult, child) and get ready to celebrate the life and work (and moustache) of one of the greatest living cartoonists, Sergio Aragonés!”

“Lew Stringer leads a panel looking back at the many highlights of British comics, charting the changes to the industry.”

“Our annual (and almost legendary) big comic draw this year celebrates the work of Image Comics in its 25th Anniversary year.”

“Join Emma Vieceli for a special screening of the award-winning anime YOUR NAME, based on the manga by Makoto Shinkai.”

Curated by the Finnish Institute in London and the ICA, this fascinating photographic exhibition, looks at the life and work of Finnish artist and writer and creator of the Moomins Tove Jansson (1914 – 2001).

The enchanting Moomins family have been delighting readers since their adventures were first published in the 1940s. Original and rare photographs and material relating to Jansson’s life, family and friendships go beyond the Moomins and reveal a highly talented painter and writer of adult fiction.

Illustrated books and early first editions of the Moomins are included in the exhibition.

Tales from the Nordic Archipelago is supported by the Finnish Institute

Commissioned by LICAF to celebrate the work of Tove Jansson, this spellbinding multimedia exhibition by super-talented artists Jonathan Edwards and Louise Evans (Felt Mistress) creates a group of fantasy islands (archipelago) and creatures.

Scenes from each island are depicted in a series of paintings and drawings while the islanders themselves are fully realised as 3D soft sculptures.

Archipelagogo is supported by the Finnish Institute

The exhibition, ‘Will Eisner: A Centennial Celebration’ features scores of key images from throughout the artist’s long career: rare surviving pages from 1930s comic books, World War II posters, several complete Spirit stories and splash pages, and key sequences from his groundbreaking graphic novels from the 1970s through to 2004.

America’s most prestigious awards for excellence in comics, presented annually at San Diego Comic-Con, are named after him.

All images are giclées, exactingly reproduced from original art provided by the Eisner estate and private collectors.

An oversize full-colour catalogue accompanies the centennial exhibition, which will make only one stop in the United Kingdom…….. Kendal!

With special thanks to Denis Kitchen.

Commissioned by LICAF, this groundbreaking exhibition by acclaimed graphic novelist Fumio Obata makes surprising connections between the nuclear plants at Fukushima and Sellafield.

Originally from Japan, Fumio has spent years researching the aftermath of the devastation caused by a massive tsunami at the Fukushima power plant in 2011.

In experimental and abstract artworks Fumio explores the invisible connections and sentiments between the two different worlds. Without taking a political position Fumio reflects the ambivalent and mixed opinions people have about the nuclear industry, in a comic strip format, based upon his interviews and meetings with local people.

THE SPIRIT was a 16 page comic section that ran for 12 years from 1940 – 1952, with a circulation of more than 5 million, introducing action, mystery and adventure through the crime-stopping escapades of its hero The Spirit – a dashing, masked vigilante who dispenses justice in ‘Central City’ and beyond.

To celebrate this hugely influential character and comic and to offer a contemporary and original homage to its creator, Will Eisner, this exhibition will feature the artwork from LICAF’s commission ‘The Spirit of Eisner’ plus the winning entries from its student competition ‘Revealing the Spirit of the Lake District’.

The newspaper will be on sale at the festival with proceeds towards LICAF’s Artists’ Development Fund. 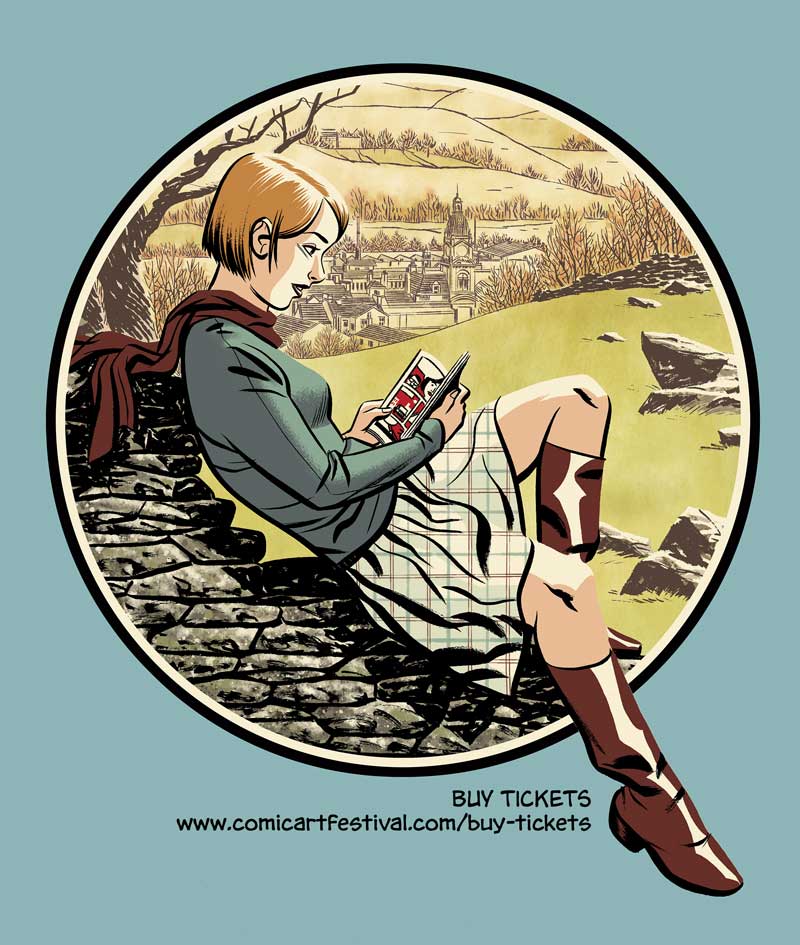 The Lakes International Comic Art Festival is the only one of its kind in the UK, taking place in one of the UK’s most beautiful areas – the English Lake District in the North West of the country, in the market town of Kendal. Modelled on European-style festivals, such as Angoulême in France, it takes over the whole town for a weekend of comic art. Its aim is to celebrate the whole spectrum of comic art, inspiring existing comic art fans and creators and, it hopes, generating new audiences and creators too. It invests in creators through a commissioning programme and has an emphasis on developing international collaborations.

Follow all the latest updates on what happening at LICAF 2017 by bookmarking the Englishman In San Diego Event Page, by checking in on the Festival Official Webpage (www.comicartfestival.com), or via their social media: Twitter, Facebook and YouTube.