Lakes spokesperson John Freeman is much more knowledgable than I (in, oh my gods, so, SO many subjects) so, when it comes to going through the extensive bio of LIACF’s latest Special Guest announcement, I think it’s just best to let him fill you in – from the press release, then…

“The Lakes International Comic Art Festival is delighted to announce its first major British guest for the 2016 Festival weekend is Mick McMahon. Perhaps best known for his work for the top weekly SF comic 2000AD, Mick’s credits also include THE LAST AMERICAN and BATMAN: BLACK AND WHITE. 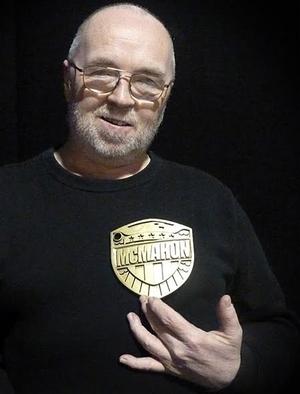 McMahon, whose highly-regarded work has influenced many comic artists, became a regular contributor to 2000AD starting with Prog Two in 1977. He drew several characters for the comic, most notably JUDGE DREDD (including his first published appearance), SLAINE and THE ABC WARRIORS.

“And Superbean, of course,” he notes.

While most of his comics work was for 2000AD, he also drew the memorable, much-praised two-part “Junkyard Demon” strip for what was then known as DOCTOR WHO MONTHLY in 1981 (a strip written by Steve Parkhouse) – and one issue of DC Thomson’s STARBLAZER, “Jaws of Death”, published in 1982.

Mick sought pastures new in the mid-1980s. His most notable work during that period is THE LAST AMERICAN, written with aplomb by John Wagner and Alan Grant, collected by Com.X, “probably my only work that troubled the scorers during my brief flirtations with Marvel Comics and DC Comics“, he says. “Although I did enjoy my work on ALIEN LEGION and BATMAN: BLACK AND WHITE, the latter being my only foray into writing (performed under the benevolent eye of David Gibbons.”

Mick’s favourite strip out of all his comics work is the relatively obscure “Decap Attack” in the British weekly SONIC THE COMIC, scripted by Nigel Kitching and Richard Piers Rayner. (Mick also drew several covers for the title).

He is currently working on KESTRALS, an upcoming series of graphic novels in collaboration with Ben Dickson.

2000AD will be publishing some of his previously uncollected “Judge Dredd” strips as part of their JUDGE DREDD: THE CURSED EARTH – UNCENSORED title in July.

Down the years, Mick has also dabbled in designing for films and video games, and for a few years he had what he calls several ‘proper’ jobs, working in game studios.

“I’ve been to Cumbria a couple of times a year for quite a while now, and I am looking forward to being up there and having someone else telling me where to go and what to do when I get there,” he says, “although I’m sure I’ll manage the bar bit without any guidance…”

Commenting on the announcement, Festival Director Julie Tait said: “We’re thrilled Mick is joining us in October 2016. His work is hugely popular with both artists and fans, and he’s been a major influence on many creators – some past and future guests of the Festival. We’re looking forward to making Mick welcome in Kendal.”

See? A more comprehensive job, I couldn’t have done. Thanks, John.

The Lakes International Comic Art Festival runs from the 14th to the 16th October in the gorgeous city of Kendal in Cumbria, it’s got one of the most crafted and comprehensive attraction listings you’ll ever find at a comics convention on the planet, and is an event that I would heartily recommend you check out. You can find out more about the Festival at its website – www.comicartfestival.com – as well as on its social media, including them there Facebooks and Twitters.

Oh, and we’ve written about the event ourselves, in the past…