London Film & Comic Con is, arguably, one of the biggest conventions in the UK. After last year’s triumphant sell out thanks to a full blown BACK TO THE FUTURE reunion, Showmasters – the organisers – could lay claim that they are the biggest and best in the UK. But how do you top a BTTF reunion? A tricky question indeed and, while Showmasters wouldn’t confirm or deny on social media, it is pretty obvious they were aiming for a BEVERLY HILLS COP reunion for this year’s summer show.

Then, unfortunately, the cancellations started to happen. 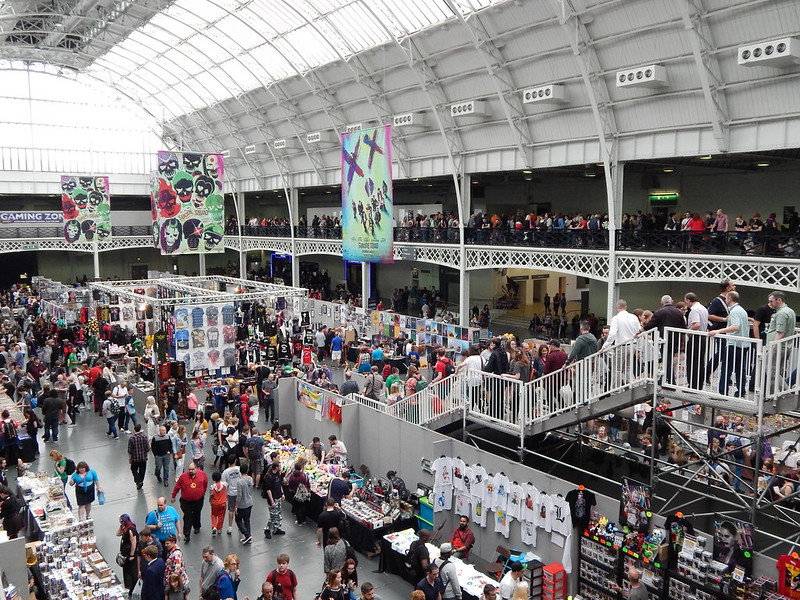 Sam Neill was announced and then cancelled days later. Matthew Lillard: cancelled. John Wesley Shipp: cancelled. So too did several other guests – they were starting to fall like dominoes. Then, a double blow just a couple of weeks before the actual event: Bronson Pinchot cancelled and was closely followed by Ron Perlman. The big name guests were getting smaller and smaller. However at the last minute a triumph, as Showmasters announced an Avenger was coming for the whole weekend – Jeremy Renner. Phew! Big name and a big coup; well recovered, Showmasters! 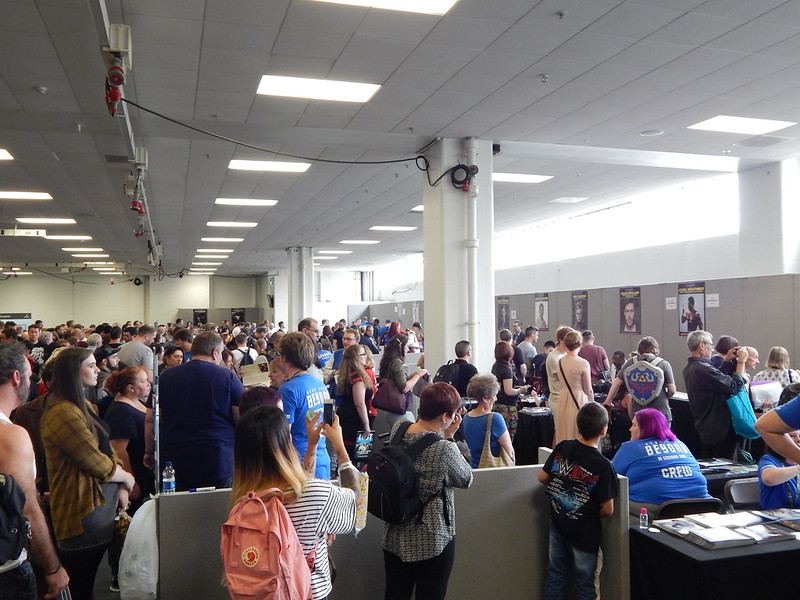 In 2016, for the first time since Showmasters moved to Olympia, they opened up the whole of the venue, a large exhibition centre that could easily hold 10,000 attendees. A massive operation, at quite the substantial cost, that made sure the experience was already a positive on arrival, with smooth entry straight into the exhibition hall. Inside, it was busy but not overly crowded which is a blessing at any con. The two ground floor sections held all the vendors and were nicely spread out enough for people to walk around without bumping into each other or any bottlenecking. However, the vendors would have to wait as it was time to scoot upstairs and get in the queues for autographs and the panels. 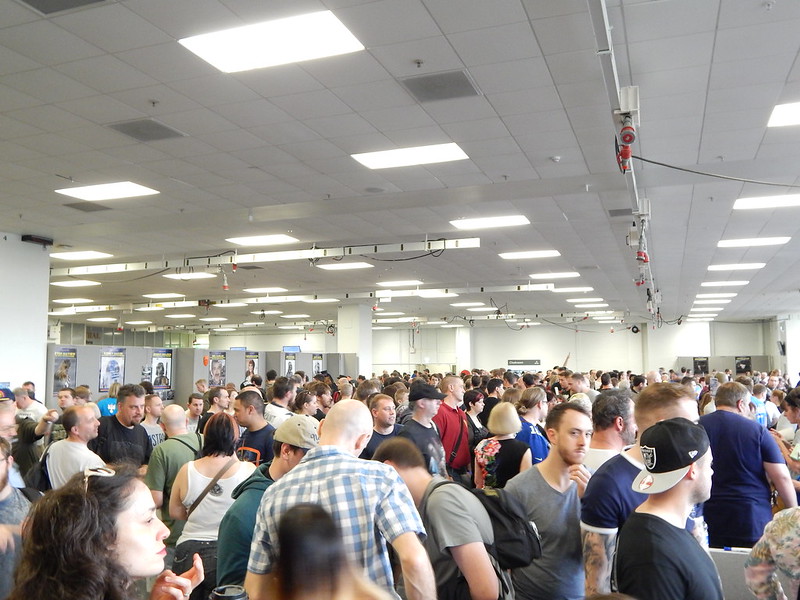 Ushered through the panel stage area into the section containing all the guests, it soon became clear everyone else had rushed up here too. I got my grubby hands on my virtual ticket for the legend that is Rutger Hauer (#427, if you were wondering) then took a brisk walk over to see Jon Heder. No problem here, straight in to talk to NAPOLEON DYNAMITE himself and ask him to sign a Vinyl Idolz figure of his most iconic creation. Heder was on top form, merrily chatting away to us about why NAPOLEON DYNAMITE will never die and …”never saying never!” to another outing for the kooky yet loveable nerd – GOSH!

After an enjoyable chat we breezed out and wandered around to see the size of queues for the other guests. Predictably, the GAME OF THRONES guests had swollen numbers around their tables and in the super famous corner, Hauer, Janssen and Mikkelsen were buried behind a sea of people. As is the British way, the crowd all very politely stood in a queue eagerly yet quietly waiting their turn. There was no shouting, but a lot of “Excuse me, could I just get past you please?” as attendees tried to maneuver their way to other guests tables. 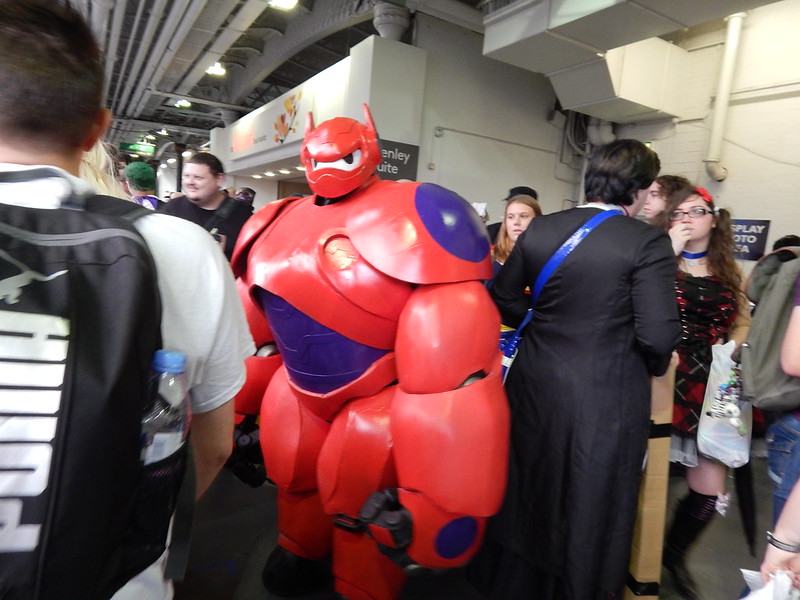 With 10am rolling around it meant the first panel of the day. It was a Q&A with Jon Heder. After having just met him and finding him an absolute delight and very funny, we ventured off to the panel area. Heder was on hilarious form and ploughed through question upon question from the audience and the moderator. However, one thing was abundantly clear from very early on: the moderator really didn’t know much of Jon’s work.

At one point, the moderator asked Heder where he came up with the voice for NAPOLEON DYNAMITE. A response of, “It’s just my voice!” Further awkwardness ensured when Heder put him on the spot and said, “You haven’t seen much of my work, have you?” While it was laughed off by all there was a serious undertone to it and quite rightly so. It came across as quite amateurish and almost as if they had just looked at Wikipedia and devised questions from there. Thankfully, Heder can hold his own when talking and the forty five minutes flew by, regardless of the poor moderator.

After leaving the Q&A panel stage in a happy mood, a sharp bump back down to Earth was about to happen. One of the autographs I was after was from British actor Steven Berkoff. As the crowd had died down at his desk, it was a straight walk up. Here is where it went quickly downhill! I asked Mr Berkoff to sign a DVD; he took the cover and didn’t look at me. Just simply signed his name and handed it back without even looking. I did ask him a question which did cause him to lift his head up and look at me; however, he then nudged his table volunteer who answered it for him. Less than ninety seconds with the guy and hardly a word said and an autograph that was so basic that it looks as if anybody could have signed it. A pitiful moment with someone who clearly did not want to be there and had no intention of interacting with anyone. 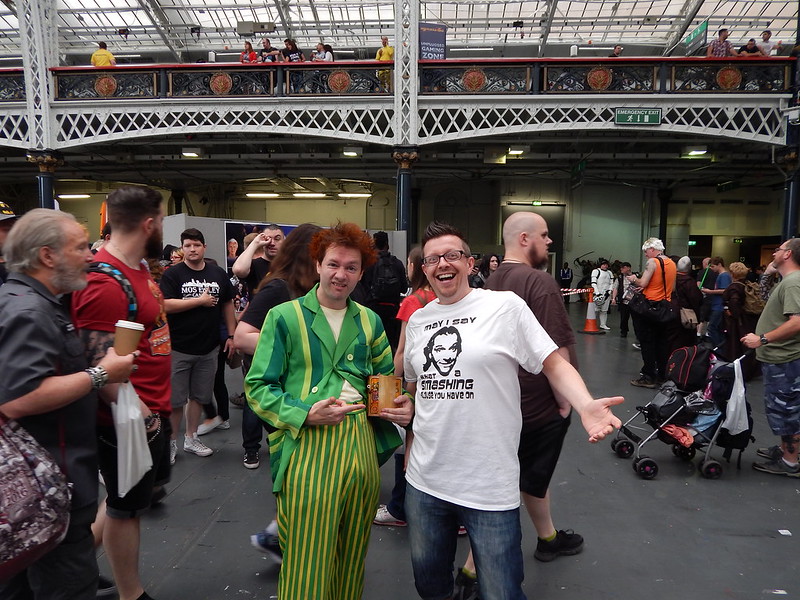 Following on from that vastly disappointing encounter, it was back to the Q&A stage for a BEVERLY HILLS COP reunion panel. This was one of the panels that drew in a large crowd and even with no Murphy involved; having Ashton, Reinhold and Berkoff involved should mean plenty of stories. Soon, the panel area started to get agitated as it was running behind schedule. Listed as forty five minutes, the clock was ticking down and by the time the stars arrived on stage, it meant we were left with less than thirty minutes to hear about BEVERLY HILLS COP.

If losing time wasn’t bad enough, it then became evident that the moderator would be the same one as the Jon Heder panel. Surely, we thought, this time he would be more prepared, BEVERLY HILLS COP is an easy one to talk about – not for this moderator, it seemed. One question about BEVERLY HILLS COP from him …one question! Total!

The big question should have been “What is it like to work with Eddie Murphy?” But no – he simply wasn’t interested in asking those questions, being much more interested in asking Berkoff about working with Stanley Kubrick, or Judge Reinhold about FAST TIMES AT RIDGEMONT HIGH. That’s all well and good – and, thankfully, the panelists gave great answers – but, after all, we are at a BEVERLY HILLS COP panel: we want to hear about the franchise! In the end, it was left to Reinhold to steer the conversation towards the main subject matter, thank goodness! But due to starting late it meant time had already run out just as Reinhold and Ashton were getting into telling stories. It was nice to see them on stage together talking about the films, but as a panel experience it was truly dreadful – an utter shambles! 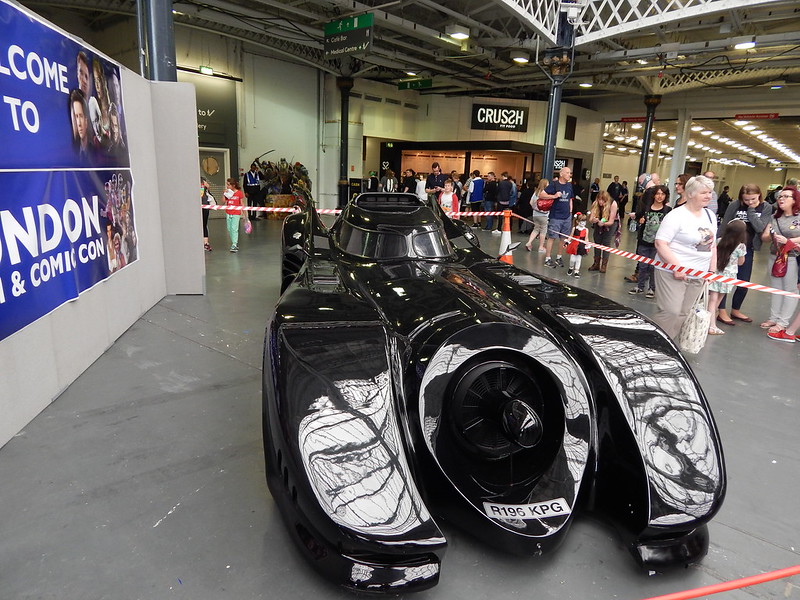 After walking around the vendors stalls, we headed out of London Film and Comic Con for another year. The star names might not have been as big as previous years but the atmosphere and layout were hugely improved.

(Oh, and if you are wondering about the Rutger Hauer virtual queue ticket, he got up to number #160, on the day. #427? Okay, maybe I was being a bit optimistic…!) 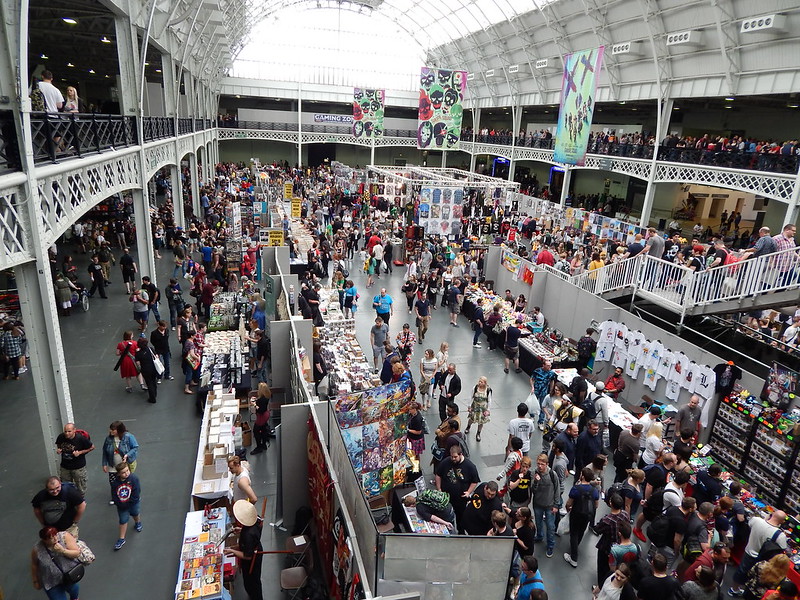